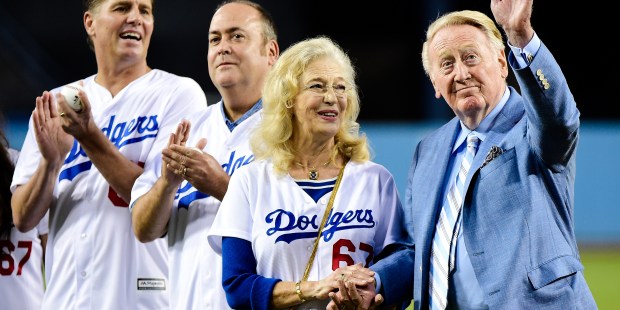 As Vin Scully prepares to call his final Dodgers game after a career of 67 years, he reflected on a notable milestone in baseball history and his role in bringing that event to a worldwide audience.

Scully has been the play-by-play announcer for the Dodgers for almost seven decades. But it was on April 8, 1974, that he helped fuel the celebration of a player from a rival team, the Atlanta Braves.

It was the night Henry Aaron broke Babe Ruth’s home run record, and Scully was at the announcer’s microphone.

“It was the most important home run I’ve ever called,” Scully told National Public Radio’s David Greene this week.

What Scully said, though, was complemented by what he didn’t say.

“The first thing I did was shut up because that place went bananas, and his family was coming out onto the field, and firecrackers were going off,” he said, referring to major fireworks, actually, not simple firecrackers. “So there were no words for me to express at all. And I got up from the table and went to the back of the room and let them roar.”

Scully was known for his moments of judicious silence during games. In an appreciation of the octogenarian sportscaster last year, Jacob Silverman wrote:

His eloquence is matched by his intuitive grasp of the tenor of a moment. From this understanding comes the most distinctive feature of a Scully broadcast: his use of silence. After a dramatic play, many announcers shout their commentary over the accompanying roar, but Scully knows when to keep quiet, allowing the crowd noise to carry the broadcast. When Hank Aaron hit his 715th home run, Scully called the ball’s flight and then went dark for about 100 seconds as Aaron galloped around the bases. In these silences, Scully has said, he is merely ‘‘shutting up’’ so that we, and he, can enjoy the moment. But they more resemble an artist working in negative space, or maybe a great jazz riff — the silence works because it’s punctuated by startling, even virtuosic, flights of improvisation.

“And I think I poured a little glass of water and took a sip,” Scully continued in the NPR interview, remembering that historic night in Atlanta. “And all of a sudden, while I was standing there, luxuriating with the roar of the crowd, it suddenly hit me. And that minute or however long shut up gave me that thought, which I then expressed.”

“That really, through the grace of God, summed up the moment I think very well,” the 88-year-old announcer reflected, confiding in NPR’s Greene that he hadn’t prepared any remarks for the much-anticipated moment.

“In all honesty, David, I have never, ever prepared to say something about an event that might occur because I might be so interested in displaying my pearls of wisdom that I might do it prematurely, and it doesn’t work,” Scully explained. “So that would be terrifying. So no, it was a very honest moment for me completely.”

Scully told Greene that he would try to call a play “as accurately and quickly as possible, and then I would shut up and sit there listening to the roar.”

The roar is what attracted him to sports in the first place, he said, recalling how he would listen to college football games sitting under the family’s radio back in 1935, when he was 8.

Scully grew up in New York and attended Fordham University, where he got his start doing radio. Greene pointed out that Scully’s last game, on Oct. 2, would be a Dodgers-Giants game, two teams that played in New York City when Scully started broadcasting. Both teams moved to California in the late 1950s.

That prompted a reminiscence about the day Scully was walking home from school and got an update on the World Series:

“I went by a Chinese laundry, and there was the line score of that World Series game,” he recalled. “And I stopped to look at it, and the score was 18 to 4 in favor of the Yankees. And my first reaction as a child was, oh, the poor Giants. And because of that, I became A, a baseball nut and two, a rabid Giants fan.”

“It makes it kind of interesting,” he said, “my last game will be a Giants-Dodgers game in San Francisco, October the 2, 2016. It will be exactly 80 years to the day when I first discovered baseball.”

And maybe that’s just one more baseball record Vin Scully will relish, as he looks back over his unique career.