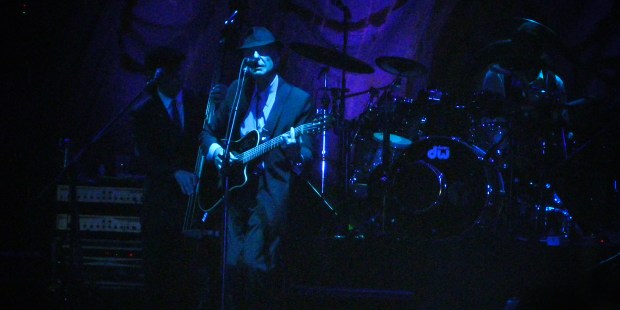 In God, a poet once wrote, there is “a deep but dazzling darkness” – and the same could be said of the music of Leonard Cohen.

Best known for “Hallelujah,” which has been covered endlessly – including at the Emmys just a few days ago – the oeuvre of the Canadian singer-songwriter, poet, and novelist is synonymous with a kind of holy gloom. Cohen famously spent five years of seclusion in a Buddhist monastery near Los Angeles in the 1990s, where he confessed to a lifelong battle with depression. But from “If It Be Your Will” to the more recent “Come Healing,” it always seems to be his Jewish heritage – and the Catholic heritage of his native Montreal – that binds the throes of melancholy with rays of hope in his songs.

“You Want it Darker,” the title track from his upcoming album, is a distillation of this holy gloom into an unalloyed, elemental form. For listeners unacquainted with Cohen’s sound and its development, the track (produced by his son Adam) is probably a jarring one. Gideon Zelermyer and the Shaar Hashomayim Synagogue Choir of Montreal lay the vocal backdrop for a slappy bass and flattened drum pattern that – compared with overproduced singles cluttering the radio – are disorienting in their simplicity.

But the production is really just a canvas for Cohen to speak, and Cohen’s voice and lyrics are the most jarring thing of all. Like Bob Dylan, the 82-year-old poet has vocal cords that have coarsened and deepened considerably over the years, dropping down to the gravelly register of Tibetan throat singing – and never so much as on one particular word in the chorus:

“If you are the dealer, I’m out of the game
If you are the healer, it means I’m broken and lame
If thine is the glory then mine must be the shame
You want it darker, we kill the flame

Magnified, sanctified, be thy holy name
Vilified, crucified, in the human frame
A million candles burning for the help that never came
You want it darker

There’s a lover in the story
But the story’s still the same
There’s a lullaby for suffering
And a paradox to blame
But it’s written in the scriptures
And it’s not some idle claim
You want it darker, we kill the flame

The song seems to carry a double meaning: We’re plunged into the self-darkening of evil and the natural darkening of our own suffering and mortality, forces which converge in the image of the crucifixion. But in this blackest of spaces, Cohen seems to hope in God as never before. The lyrics draw from both the Kaddish and the Lord’s Prayer, but revolve around that haunting Hebrew word hineni, which translates to “Here I am.” The song ends with Zelermyer chanting the word four times in a soaring tenor.

“Hineni has one major reference back to the Old Testament, relating to Abraham in God preventing him from sacrificing his son Isaac,” Zelermyer explained to the Montreal Gazette. “But in this case, I think hineni is more a reference to Leonard as someone trying to come to an understanding with God, someone reckoning with final tallies in the Book of Life: Here I am – I am ready.”

The Gazette notes that Cohen has been rumored to be ill. A journalist at NPR points out that you can even hear a sharp mid-breath edit in the vocals to connect Cohen’s takes, speculating that this album might be Cohen’s swan song. “Despite the depth of his voice and the strength and wisdom of his writing, I discern a frailness… It’s sad and difficult, but as good as this is, I can imagine this forthcoming album as Cohen’s last statement.”

Whether or not it’s his last, “You Want it Darker” instantly takes its place among his greatest.