My mystifying and miraculous “spiritual childhood” with St. Padre Pio 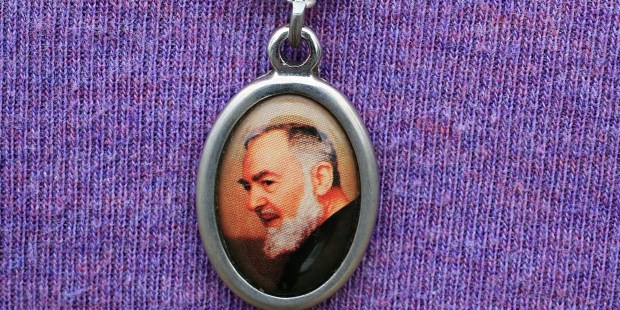 The more I learned, the more Padre Pio’s presence in my life began to make sense

I confess, I have a crush on St. Padre Pio. It’s a full-on saint crush, and I’m not apologizing; just explaining.

Had I known what this saint might one day mean to me, I wouldn’t have been so flippant about our first encounter. I was a child and there he was, staring back at me from a prayer card on my old Irish grandfather’s dresser. His appearance was out of place among all the framed smiling faces of my brothers, sisters, cousins, aunt and mother. He looked very grouchy, almost a little bit mean, and he was awkwardly holding up a hand wrapped in cloth. This is why the memory remained with me so much, I think, because it seemed so odd that my granddad would put this stranger at the forefront of this otherwise jovial mix. Yet, as I have come to find out, appearances can be deceiving.

To be honest, I didn’t think much about that face for the next 25 years.  That is, until one gorgeous fall, when I found myself staring down at my younger brother in a hospital bed.  He was almost unrecognizable, so still and lifeless, with tubes coming in and out of his pale body. He had spent weeks and weeks in an induced coma in the intensive care unit and each day my family would anxiously wait to hear the doctor’s prognosis for recovery. “Any changes? Any new hope?” we would say. And repeatedly we heard a version of “We have no idea,” “It doesn’t look good,” and “We are not sure what else to try.” Yet also each day, you could find my mother, praying at my brother’s bedside, calm, attached to a prayer book. And the picture on the cover was the same bearded, somber-faced man I’d encountered years before.

And then, shortly after we heard the words that no one would ever want to hear about a beloved sibling, my brother woke up. Just like that. On September 23rd: Padre Pio’s feast day.

WATCH: Rare footage of a day in the life of Padre Pio

Since that time, although I never purposefully pursued him, St. Pio has never left my side. Following the painful and untimely death of both my parents, this mysterious saint became ever more present. After a necessary renovation of my parents’ home, in a house ripped down to its studs, I found him everywhere: sweeping up debris, his medal was in my dustpan; putting away towels, a prayer book fell from the cabinet. A relic even fell out of my car door one day. Yes, in the most unexpected of places, there he was. And he didn’t make his presence known to just me. As recently as this summer, while my brother was in Ireland rifling through his suitcase, a St. Padre Pio medal fell from his bag.

As I began to acquaint myself with this great saint I found myself taken in, fascinated, mystified; I found him to be brave and candid, yet ever endearing. (If you haven’t read his biography, I urge you to do so.) Padre Pio is truly a modern saint. He died less than 50 years ago, in 1968. The stories of his life are not those of hearsay or legend; they are first-hand accounts of his words, his struggles, and his influence. His encounters with the devil and his ability to bilocate, heal, and read souls are based on numerous documented sources. His miraculous stigmata was examined by world-renowned physicians over and over again. We even have countless photographs of him and videos of him saying Mass.

The more I learned, the more Padre Pio’s presence in my life began to make sense. The photograph I encountered as a child, born from a devotion of my grandfather, and my mother’s unrelenting pleas during my brother’s illness, had placed me, even unwilling, under his protection. Truly, I had been “grandfathered in” to this saint’s protection.

The Unknown Miracles of Padre Pio, Saint of the Stigmata

The gift of spiritual childhood is available to you too. By his own account, his love for souls who desire to be under his patronage is limitless, open to all, and, as I have experienced, still expanding to include those who are seeking him even decades after his death.

WATCH: Bet you didn’t know THIS about Padre Pio!