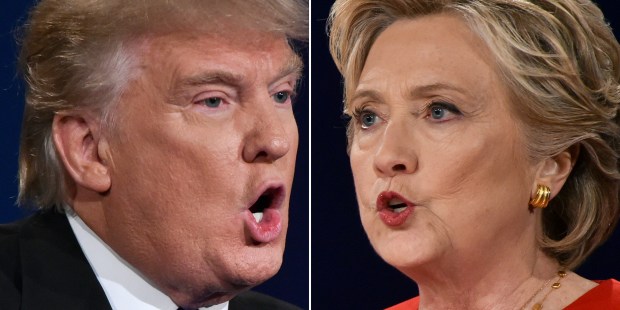 On Monday night, my wife having gone to sleep, because she’s one of those weird creatures who get up at unimaginable hours of the morning, I took my laptop over to our nearby pub to work and watch the football game. I think I used my time better than those of you who watched the presidential debate. Plus I got draft beer and the Monday night half-price burger special, and got to talk to some people I know.

Some of you may have had good reason to watch the debates. You may study political speech or public rhetoric. You may want to understand the psychology of those rapacious for power or see what overmastering ego and narcissism do to people. You may enjoy watching moral and ideological train wrecks. You may be writing a Broadway musical about Robespierre and Mussolini, or about a battle between Saruman and Toad of Toad Hall.

But otherwise, don’t. That’s my advice. I can’t believe many people waver between the two candidates in a way that a debate will help settle. The candidates calculate their performances for effect, not for illumination. In any case, this year we know the candidates so well they’re not likely to reveal something new about themselves accidentally. If they do, you can always read about it in the news.

If you support one of the candidates, you might enjoy the debates — but in the way a boxer’s fans enjoy watching him hit the other boxer. That’s not the most edifying way to spend an evening. It’s probably bad for your soul.

Watching the debates just isn’t a good use of time. But there’s a Catholic reason to do something else. The debates work as part of a system that turns politics into a sporting event, the better to capture and hold people’s love. Or, better, into a substitute religion — a faith in things unseen that will bring us a kind of salvation. The debates are one of that system’s rituals and ceremonies.

We almost inevitably find ourselves treating politics as ultimate. It’s the way our minds and souls are wired. The world is too much with us, we have given our hearts away. We quickly become passionate about politics and more passionate than we tend to be about the Faith.

Look at how quickly even the devout Catholic will leap to the defense of his candidate and how assertive he will be, compared with how slowly and quietly he comes to the defense of Pius XII, say, or Mother Teresa, or his pastor. I know this myself, the feeling that I must speak up for my candidate, right now and taking no quarter, and the feeling I must be judicious and restrained in speaking up for one of my fathers in God. The Faith feels comfortable, but politics makes itself feel urgent.

Of course, political decisions will help or hurt real people, the vulnerable especially. We can’t abandon the political life and exit the system entirely. The cynical belief that it’s all a sham, that elections make no difference, is I think wrong as a matter of fact. More and more Catholics speak like that, usually with the argument that abortion is still legal despite all the allegedly pro-life politicians who’ve been elected. It’s too easy an answer, and it fails as a prudential judgment. We can still do good in the political world.

On the other hand, the political system is a worldly system, at least partly governed by the principalities and powers St. Paul warns us about in Ephesians. The Catholic historian Lord Acton spoke truly when he noted that “power corrupts” and in the follow-up sentence, “Great men are almost always bad men” (“great” meaning great in worldly affairs).

The political system will try to secure our allegiance by claiming to deliver the final goods it can’t possibly deliver. It wants us as its servants. It wants us to be good Americans, and bad Catholics.

We are aliens and strangers, foreigners and exiles in the world, as St. Peter insists. The Compendium of the Social Doctrine of the Church explains (section 48): “every cultural, social, economic and political accomplishment . . . must always be considered also in the context of its relative and provisional reality, because ‘the form of this world is passing away’ (1 Cor 7:31).” Even when the world and its institutions work fairly well, we keep our distance. We join in, but with reservations.

In theory. In practice, we’re all in. The debates corrupt the passions of Catholics and other Christians. The process of which they’re a crucial part wants to turn our attention from the things of God, which relativize and order the things of man to political life as if it were God. We must keep our distance and to do that we must push back, hard. We need to free ourselves from the thing that holds us down.

We can start by rejecting the political system’s religious rituals and ceremonies, when they do us no good. Push back. Don’t watch the debates. They don’t matter. Do something else, even if it’s only to watch a game, talk to friends, and catch up on your email.