“Speechless”: Seeing our own family in a sitcom 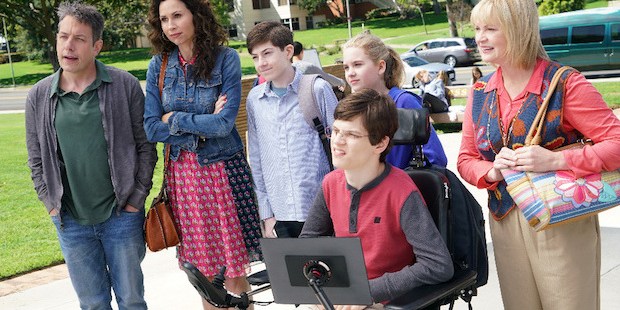 Courtesy of ABC
SPEECHLESS- "Pilot" - Maya DiMeo moves her family to a new, upscale school district when she finds the perfect situation for her eldest son, JJ, who has cerebral palsy. While JJ and daughter Dylan are thrilled with the move, middle son Ray is frustrated by the family's tendencies to constantly move, since he feels his needs are second to JJ Soon, Maya realizes it is not the right situation for JJ and attempts to uproot the family again. But JJ connects with Kenneth, the school's groundskeeper, and asks him to step in as a his caregiver, and Ray manages to convince Maya to give the school another chance, on the series premiere "Speechless" WEDNESDAY, SEPTEMBER 21 (8:30-9:00 p.m. EDT), on the ABC Television Network. (ABC/Adam Taylor)
JOHN ROSS BOWIE, MINNIE DRIVER, MASON COOK, KYLA KENEDY, MICAH FOWLER, DINA SPYBEY-WATERS
Share
Print
The Frech Family | Sep 28, 2016

Hollywood gets it right this time: TV characters with disabilities portrayed as regular people — plus it’s funny!

[On consideration of Ella Frech’s widely read letter to Hollywood about how it depicts the lives of people in wheelchairs, we asked the Frech family to watch the new sitcom, “Speechless” and share their thoughts with Aleteia’s readers – Ed]

Last week, we watched the first episode of the new ABC sitcom Speechless. Then we re-watched it a few more times.

We’d been counting down the days until the premier ever since we saw the trailer. There are so few television characters with disabilities, and even fewer who are shown as regular people and not the bad guy (people with prosthetics are almost always bad guys) or someone to be pitied.

The character of J.J. DeMeo in Speechless isn’t a person to be pitied, or a burden on his family, or a prop in the background. He’s an important part of his family. He’s funny, smart, and resourceful. The fact that he uses a chair and can’t talk aren’t as important to his character as his personality is.

J.J. isn’t the only one that had us cheering. His mom, Maya, is exactly like every special needs mom we’ve ever met. They’re strong, bossy, pushy, sarcastic, and they love their families intensely. These moms demand that the world accept their children for the amazing people that they are, and that their children never have to apologize for what everyone else might see as their shortcomings. Maya wasn’t portrayed as some sort of heroic saintly super-mom, but flawed and too often riding rough over the world around her, including her other children, in order to get J.J. what is in his best interest. Her character was real, and we liked her all the more for it.

Ray and Dylan, J.J.’s siblings, were very familiar too. They were fighting hard to figure out what makes them special and to stand out to a world that only wants to stare at their brother.

And we loved the dad! He wasn’t an idiot. He was just as funny and smart as the rest of the family. He was the voice of reason to Maya’s constant fight with the world, and very necessary to the rest of the family. It was refreshing to see a dad on TV who wasn’t stupid, fat, and a joke. He reminded us of our dad who sometimes has to talk Mom down off the ceiling.

The funniest “character” was the school, and all of its ridiculous political correctness. The teacher who told everyone to stand and greet J.J. and then quickly told them to sit down in horrified tones because J.J. himself can’t stand. The kids who applauded him for being an “inspiration” just for doing something normal like coming to school, and wanted to elect him Student Body President just because of his being different and to prove how inclusive they are, and the teacher who said about another student “his cousin is deaf so he gets it,” is all exactly how the world treats disabled people to our faces, like they’re puppies to be petted.

We wholeheartedly endorse the show Speechless because it’s nice to see a family that looks like ours on TV, but mostly because it’s clever and funny and well written. The second episode is on tonight and we hope you’ll watch it with us.

Read more…Me Before You: Dear Hollywood, Why Do You Want Me Dead?

Read more…Ella Has Wheels, And Questions About Dating