The woman beside the man, Frances Chesterton 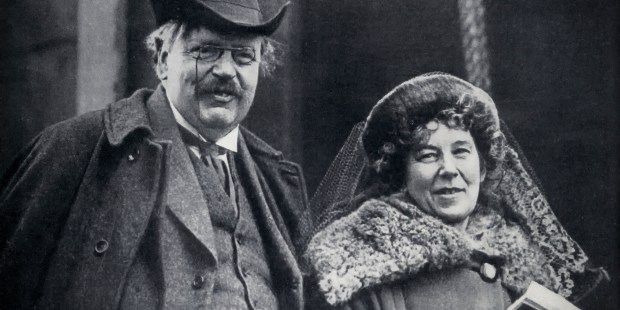 G.K. Chesterton’s wife was a much needed partner, spiritually as well as professionally

There is an adage: “Behind every great man is a great woman.” If Frances Chesterton had been behind her husband, we would never have seen her. Gilbert Keith Chesterton was a giant of a man in stature and personality. Instead, Frances stood beside him and even sometimes in front of him and thus we seen both her and her influence on him, especially through the efforts of Nancy Carpentier Brown in her 2015 biography, The Woman Who Was Chesterton.

Frances Blogg was born on June 28, 1869. Her father George was a diamond merchant and her mother Blanche was a writer and editor. Blanche suffered from bouts of depression and her children would too, while George died of a heart attack when Frances was 14. The family was nominally religious, members of the Church of England, but after Frances attended an Anglo-Catholic school in Windsor, St. Stephen’s College, her faith and devotion grew. She was well-educated and possessed great language skills, sometimes writing her poems in German and translating them into English.

Frances and G.K. Chesterton met in 1896 at a literary debating society. His immediate admiration and growing love for Frances meant that she led him to greater faith in Jesus Christ and attendance at Church of England services. In 1911 Chesterton dedicated his epic poem The Ballad of the White Horse to her: “Therefore I bring these rhymes to you/Who brought the cross to me.” He would return the favor 26 years later when he became a Catholic in 1922 and led her to join him four years later.

They were engaged in 1898 and married on June 28, 1901. Frances stood beside Chesterton in his professional work but also led him to a healthier lifestyle as they moved away from London and the pubs to live in the country. They wanted to have a house full of children—hoping for “seven beautiful children”—but bore the crosses of infertility and ill health.

Frances was Chesterton’s business manager, organizer, and reminder of deadlines. The most famous anecdote about how much help Chesterton needed to keep on track is that he once sent her a telegram, “Am at Market Harborough. Where ought I be?” She had to be patient but firm as he relied upon her.

Frances was also a poet and playwright in her own right. She wrote Christmas plays every year for performance in their home and her carols, poems sent as Christmas messages, were set to music; for example, “Here is the little door” with Herbert Howells the composer.

Her biographer Nancy Carpentier Brown has also collected and edited those Christmas productions in the book How Far Is It to Bethlehem: The Plays and Poetry of Frances Chesterton (Chesterton & Brown Publishing, 2012).

Frances was beside Chesterton when he traveled to the Holy Land, to Continental Europe, Ireland, and the United States. She was the great hostess in their home at Beaconsfield, welcoming guests and travelers, family and friends, caring for a great menagerie of pets and farm animals, working with his secretaries, and overseeing household staff.

He finally went ahead of her again, when he died on June 14, 1936. She wrote on their appointment calendar, “The Lights went out at 10:15 a.m.” Frances struggled to live without her husband, writing to Father John O’Connor, the model for Father Brown of Chesterton’s mystery stories, “How do lovers love without each other? We were always lovers.” (Brown, p. 190)

Before she died on December 12, 1938, she wrote several poems about how much she missed Chesterton, traveled a bit, visited his grave, and prayed for the repose of his soul. Those who knew them both well, as Brown notes, knew exactly how important Frances had been to Chesterton’s literary accomplishments: the books, essays, articles, poetry, plays, radio broadcasts, speeches, and lectures. As the great woman beside—not behind— the great man, Frances Chesterton was her husband’s companion and lover, muse and friend. She helped him achieve greatness.