How Amoris Laetitia saved my marriage 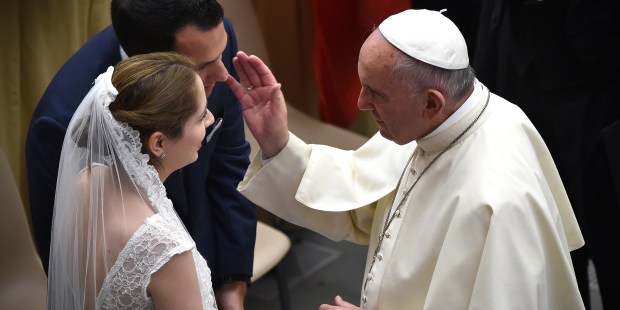 Amoris Laetitia came out while I was sitting in a hospital with my Tio (Uncle) Roy when he was dying in the ICU. At the time, my husband and I were on very shaky ground as far as our marriage was concerned. After many years of struggle that caused a lot of damage, pain and debt I considered that maybe it was time to go back to the divorce lawyer I had contacted once before, and get divorce papers drawn up.

I began therapy when our marriage was at its lowest point. We started out going together, but that didn’t work out. We realized that before we could do therapy as a couple, we both had to deal with ourselves, and what we had been through before we ever even got married. Neither of us had done that. We both assumed that getting married, and becoming Catholic after encountering and falling in love with Christ, would just “fix” all that stuff.

It doesn’t, and we had had a major setback while I was in the hospital with my uncle. It was bad.

I was looking forward to Pope Francis’ exhortation, because it was about love and marriage. I do think that marriage prep needs a lot of work. After decades and decades of divorce in this country, many people are really not prepared to enter into the sacrament with a sufficient understanding. My husband and I had the best priest, and support of very holy people to help prepare us for marriage, but what we had not done was deal with the addictions, struggles, traumas and personal sins that contributed to the breakdown of our first marriages. I was raised by a single mother, and my husband’s parents were divorced and remarried multiple times, so neither of us had ever seen a well-functioning marriage up close and personal. We had no models for marriage.

The one example of a sacramental marriage that we both saw was that of my Tio Roy and Tia Mary — Catholic, extremely devoted and active in the home parish where they were married. They had celebrated 50 years together at his death, and yes they had ups and downs, but they worked through it all, because they knew how to, and depended upon sacramental grace. I have written about what I learned about a sacramental marriage by witnessing how they were together as he was preparing to die. The truth is, I would never have comprehended that sacramentality, or even noticed it, had I not been reading Amoris Laetitia while I sat with them, with Tio Roy, in those difficult days.

Reading it opened my eyes to what was going on before me, with my aunt and uncle; reading it in those moments is what saved my marriage.

I was ready to give up, and simply say our marriage seemed like a mistake – that it wasn’t meant to be. But in Amoris Laetita Pope Francis was telling me, step by step, how to have a sacramental marriage and what one looked like. What one looked like was exactly like the marriage that I was watching right in front of me, with my Tia leading us all in Rosaries as my Tio took his final breaths. She loved him, and he loved her, all the way up until he left this world.

While everyone else was watching people on social media go nuts about this “scandalous” exhortation, I was witnessing the mysterious “scandal” of a sacramental marriage – how it maintains and perseveres, and doesn’t take the easier way out, even unto death.

“I thank God that many families, which are far from considering themselves perfect, live in love, fulfill their calling and keep moving forward, even if they fall many times along the way,” wrote Pope Francis.

I saw my marriage in that sentence and I saw that falling is part of sacramental marriage. Getting up, with the help of God’s grace — that grace bestowed with the sacrament — is how my husband and I fulfill our calling and move forward. That is what we are doing now.

I made the choice to love my husband the way my Tia loved my Tio – unconditionally, leaning fully and faithfully on sacramental grace — and that has changed everything: how I talk to my husband; how I thank him for everything he does for me; how I forgive him or set boundaries when I need to. How I see him as beloved of God, blessed and broken, just like me.