Mourners pray for the soul of Marlins’ star Jose Fernandez 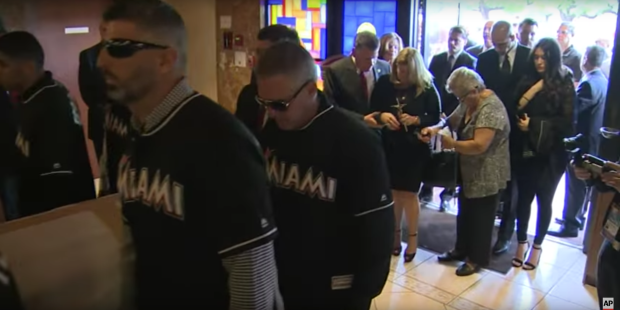 The rising star of the Miami Marlins, Jose Fernandez, died in a tragic boating accident in Florida last Sunday. Fernandez was one of three men who died after their boat collided with a jetty that may not have been clearly identified.

Fernandez, 24, was the 2013 National League Rookie of the Year and a two-time All Star during his short career with the Marlins. He arrived in the country in 2008 after defecting from Cuba with his mother and sister. It was his fourth attempt to enter the country, having been jailed for a previous attempt and according to reports during this last attempt Fernandez had to jump out of the boat to save his mother from drowning.

He was known for his “magnetic smile” and was a fan favorite.

Mourners began prayers on Wednesday, when Marlins hitting coach Barry Bonds led the team in prayer before leading the hearse from Marlins Park to La Ermita de la Caridad, the shrine to Our Lady of Charity, Cuba’s patron saint. The procession then traveled to St. Brendan Catholic Church, where there was a public viewing. Hundreds of fans stopped by to pay their respects and the viewing did not end until just before midnight.

The following day, family and friends packed St. Brendan Catholic Church to mourn the loss of Fernandez during a private funeral Mass. Marlins Chaplain Father Jose Alvarez presided a the funeral, joined by a priest from Our Lady of the Lakes in Miami Lakes. The Mass was celebrated in English and Spanish and according to reports was attended by about 300 people. Among those present were Commissioner Rob Manfred and singer Mark Anthony.

Father Alvarez spoke in his homily about the tragedy of the situation, saying, “It’s very difficult to understand this…Why so young — someone with such bright promise?”

Alvarez then added, “He was a young man who was larger than life — a good, kind-hearted, loving young man who loved life, who loved people…He was a guy of enormous dimensions. Jose was too good for this league.”

At the conclusion of the Mass, according to the Miami Herald, “mourners gathered near Fernandez’s casket, draped with a white pall embroidered with a gold cross, for a final blessing from Alvarez…Fernández’s mother and grandmother, who on Wednesday bestowed kisses on the casket, once again seemed unable to let it go.”

Marlins owner Jeffrey Loria announced Monday that the team would retire Fernandez’s number after Monday’s game “when Marlins players honored Fernandez by each wearing his jersey number during their game against the Mets, in which he had been scheduled to start.”

Let us pray for his soul, the consolation of his family as well as the two other souls who died in the tragic accident.

Eternal rest grant unto them, O Lord.
And let the perpetual light shine upon them.

And may their souls and the souls of all the faithful departed, through the mercy of God, rest in peace. Amen.