Pope Francis travels to Georgia and Azerbaijan: A visit to the edge of a wounded Europe 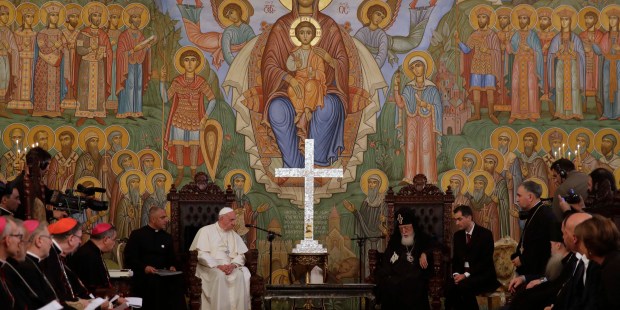 © Alessandra Tarantino / AFP
Pope Francis (C-L) listens to Ilia II (C-R) Catholicos-Patriarch of All Georgia, at the Patriarchate in Tbilisi on September 30, 2016.
Pope Francis landed in Georgia on September 30 for a visit billed as a mission of peace to the volatile Caucasus region that will also take him to Azerbaijan just months after he visited neighbouring Armenia. / AFP PHOTO / POOL / Alessandra Tarantino
Share
Print
Vatican Insider | Sep 30, 2016

On Friday 30 September, Pope Francis will be paying a three-day to the Caucasus region. He will visit two countries, Georgia and Azerbaijan, completing the pilgrimage he began in Armenia last June.

The pope’s intention had originally been to combine visits to all three countries in one single trip but this was not possible due to the pan-Orthodox Council, which meant that the trip had to be split in two, so as not to interfere with Georgian Patriarch Ilia’s presence at the great Synod: the Bishop of Rome would not have been able to visit a country with such an ancient Christian tradition as Georgia, without the head of the most important Church being present.

As fate would have it, Ilia was among those Patriarchs who decided at the last minute not to attend the synod in Crete. But the schedule for the Pope’s split visit had already been set.

The Pope’s trip to a region nestling between Europe and Asia is of the same ilk as his European visits: he tends to opt for small countries where the wounds of conflict have not yet healed, where the Pope hopes to find paths of reconciliation and peace.

He often chooses countries where Catholics are a “small flock” but where they live alongside people of other Christian denominations and other religions. His visit to Georgia and Azerbaijan is – as his voyage to Turkey was – a pilgrimage that will touch on the tragedy of refugees fleeing ISIS.

Francis will share in the suffering of Iraqi Christians at the Assyrian-Chaldean church named after Simon Bar Sabbae in Tbilisi on Friday evening. His visit will also touch on the tragic experiences of other refugees who were forced to leave the areas on the border with the Russian Federation due to the conflict that saw Mosco send tanks into Georgia in 2008. Another open wound is the dispute between Azerbaijan and Armenia over the Nagorno Karabakh region.

Last June, Francis said in a statement: “I accepted the invitation to visit these countries for two reasons: on the one hand to highlight the ancient Christian roots present in those lands — always in a spirit of dialogue with other religions and cultures — and on the other, to encourage hope and pathways of peace.”

“History teaches us,” he said “that the path of peace requires great tenacity and continuous steps, starting with those that are small and gradually making them grow, taking one towards the other. Precisely for this reason I hope that each and every one of us shall give our contribution to peace and reconciliation.”

“I think it is quite clear that the Pope nurtures a very keen desire to be a spokesman of peace, wherever he may go,” said the Vatican Secretary of State, Cardinal Pietro Parolin. “As such, even political situations and strategic plans take second place so to speak. In the case of the Caucasus, I do not think one can expect an easy solution to all the problems facing the region. These are going to take effort, political willingness and an openness to compromise. But Pope Francis is going to the Caucasus with a deep sense of humility, seeking above all to listen, understand and consequently to encourage all initiatives of dialogue and openness towards others.”

During the ecumenical meeting and prayer for peace in Yerevan on June 25, 2016, Francis mentioned the conflict in Nagorno Karabakh, expressing his hope for a peaceful solution. The conflict flared up again in April and members of the OSCE Minsk Group are trying to reintroduce initiatives for a compromise that might finally lead to peace. It should not be forgotten, then, that Georgia and Azerbaijan, as well as Armenia, were part of the Soviet empire and Russian Federation is trying to keep them within its own sphere of influence or at least prevent others from trying to impose theirs.

The visit, particularly the first leg in Georgia (two days), is laden with ecumenical importance. The Georgian Orthodox Church, which is on good terms with the Holy See, is among the few that do not recognize the validity of baptism administered by the Catholic Church. Francis and Ilia II are to embrace but will not pray together. The Patriarch of the Georgian Orthodox Church will not personally attend the Mass to be celebrated by the Pope on October 1, but he has decided to send a delegation. The Holy See took this to be an important sign. It should not be forgotten that the Pope’s visit to Georgia is a journey to Europe’s Christian roots: Christianity was declared the state religion in 337 AD and the Georgian Church proclaimed itself autocephalous as early at the 5th century, gaining its independence from the Patriarchate of Antioch.

Azerbaijan is a majority Muslim country (96%): 63% of the population is Shia and 33% Sunni. It attracts the attention not only of neighboring country Iran, but also of Arab countries interested in introducing Islamic fundamentalism here too. The country’s civil and religious authorities have tried everything in their power to keep the state separate from religion, keeping radical infiltrations at bay. Such infiltrations are being sought, for different reasons, by neighboring Muslim countries, including those in the northern Caucasus.

The presence of the Pope, who is scheduled to meet religious leaders on Sunday afternoon, will offer encouragement on this path of “multiculturalism” and tolerance which is under daily threat in a world plunged into chaos by a “piecemeal World War III,” in which religion is being used as a cloak to hide economic and political interests.