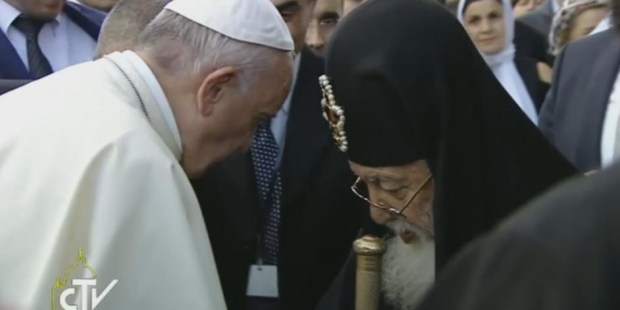 On a day when an official Orthodox delegation refused to attend an open-air Mass with Pope Francis in the capital of Georgia, the Pontiff and his host, Georgian Orthodox Patriarch Ilia II spoke of and demonstrated important signs of unity.

“Notwithstanding our limitations, we are called to be ‘one in Christ Jesus, (Gal 3:28),” Francis said at the Orthodox patriarchal cathedral Saturday, the second day of his brief visit to the former Soviet republic, “and to avoid putting first disharmony and divisions between the baptized.”

Earlier in the day the Orthodox delegation was absent from the Pope’s celebration at Tbilisi’s stadium. The decision was communicated yesterday evening and taken as a result of opposition from radical groups within the Georgian Orthodox Church.

According to Crux, a Vatican spokesman explained the absence saying “their canon doesn’t allow it.”

The law of the Georgian Church prohibits them to pray with Catholics, since the two Churches aren’t in Eucharistic communion.

But in Tbilisi’s Svietyskhoveli Cathedral, a 1000-year-old edifice that is the spiritual heart of the Georgian Church, the Pope was welcomed by Ilia II, who had greeted him warmly upon his arrival on Friday. The two religious leaders entered together holding hands, as the choir chanted traditional music. The trembling Patriarch appeared to be suffering. Francis and Ilia stopped to pray in silence before a niche where, according to tradition, St. Sidonia was buried along with the undivided tunic of Christ. Two votive candles were lit.

The Patriarch welcomed Francis to “Georgia’s most ancient and important church” and recalled the beheading of “100,000 Christians” in Tbilisi, who “in the 13th century refused to stamp on icons” and spit on them. “Our unity,” he said, “lies in true faith and only true faith can educate humanity. Once again, Your Holiness, I wish to express my immense respect and fraternal love toward you.”

Francis then took the floor, thanking Georgia’s Orthodox faithful for their “moving witness of faith” which did him a great deal of good and for their “goodness.” “The history of Georgia,” he went on to say, “is like an ancient book that, with each page, relates holy testimonies and Christian values which have forged the soul and culture of the country. This esteemed book, no less so, speaks to us of deeds of great openness, welcome and integration. These are most precious and enduring values, both for this land and the entire region. Such values express the Christian identity, which is maintained when deeply rooted in faith, and also when it is open and ready, never rigid or closed.”

“The Christian message,” he added, “has for centuries been the pillar of Georgian identity: it has given stability through so many upheavals, even when, sadly not infrequently, the fate of the nation was bitterly left to fend for itself. But the Lord never abandoned the beloved land of Georgia.”

Francis then mentioned the precious relic the cathedral houses: “The Lord’s tender and compassionate closeness is especially represented here in the sign of the sacred tunic which represents a “mystery of unity” and “exhorts us to feel deep pain over the historical divisions which have arisen among Christians: these are the true and real lacerations that wound the Lord’s flesh.”

“Thus,” Francis added, “notwithstanding our limitations and quite apart from all successive cultural and historical distinctions, we are called to be ‘one in Christ Jesus’ and to avoid putting first disharmony and divisions between the baptized, because what unites us is much more than what divides us.”

“May the resplendent riches of this people,” the Pope concluded, “be known and esteemed! May we always increasingly share the treasures that God gives to each person, for our mutual enrichment, and to help one another grow in what is good! May fraternity and cooperation increase at every level! And may prayer and love make us ever more receptive to the Lord’s ardent desire, so that everyone who believes in Him, through the preaching of the Apostles, will ‘be one.’”