The toy smuggler who risks his life for children 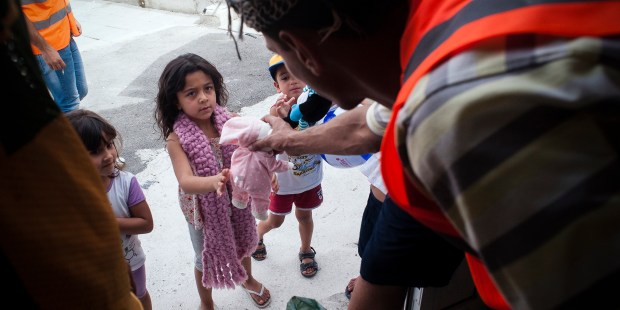 His name is Rami Adham, but to many people in Syria, he’s known as “the toy smuggler.” The Syrian husband and father of six who lives in Helsinki, Finland, decided he needed to do something for the people of his native country. One of his daughters suggested they send toys from their family, and now four years and 28 trips later, Adham has carried many bags of donated toys into Syria for children who have lost everything. He told the BBC that the feeling of handing out toys to the children is “indescribable:”

“The smile they give you back, the gratitude… you help them forget that they have lost their homes, their schools, their toys.”

He brings Barbies and other items, but mostly stuffed animals that can be crammed more easily into the bags. After flying to Turkey, he walks by foot through the mountains and into Syria, carrying up to 155 pounds of toys. It’s taken him up to 16 hours to make the trek.

For Adham, his efforts are not only an act of love and compassion, but an investment in the future:

“These little heroes that represent Syria’s future are to me extremely valuable to preserve, to give them a moment out of the fear and instability,” he says.

The stories he has witnessed and heard while in Syria are difficult to bear; children experiencing horrors they should never have to endure. So many orphans; so much trauma.

“The kids there are not afraid of death anymore. They wish to die instead of being injured – they say when you die you don’t have to worry any more.”

Each life each time he’s gone to Syria on these missions, Adham has risked his life and although his wife worries, she supports him because she understands his deep sense of mission. Many friends of his in Syria have perished and recently, when he found himself in his home city of Aleppo, he was devastated by what he saw. He told the BBC:

“Words really fail to describe it — it’s not easy when you see your city right in front of you, after travelling all these thousands of miles… I feel like I’ve deserted my people in Aleppo. I feel like I’ve done nothing.”

But the truth is, Ahmed has done a great deal to bring help and hope to his suffering brothers and sisters. He hopes to keep returning, but says he can’t be sure. He’s more worried for his life than ever before. But if he makes it back, he says toys will be first on his list.