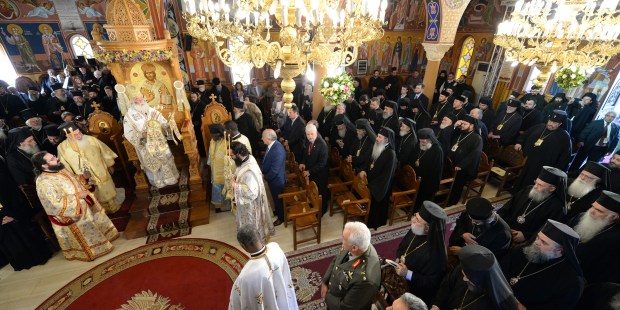 John Mindala/Ecumenical Patriarchate-cc
His Beatitude Patriarch Theodoros II of Alexandria presides over the Divine Liturgy at the Annunciation Church in Kissamos, Crete, during the Holy and Great Council of the Orthodox Church, 2016
Share
Print
John Burger - published on 10/03/16

The group of scholars and Church leaders trying to forge a way towards the restoration of full communion between the Catholic and Orthodox Churches has come to a common understanding of the relationship between synodality and primacy in the Church in the first 1000 years of Christianity, with particular reference to the role of the Bishop of Rome. A document they agreed upon at a recent meeting in the Italian town of Chieti acknowledges the primacy of Rome among the original five patriarchal sees of the Church.

The Chieti document, “Synodality and Primacy During the First Millennium: Towards a Common Understanding in Service to the Unity of the Church,”also gives Catholic-Orthodox dialogue a common basis on which to build, says Msgr. Paul McPartlan, a member of the Joint International Commission for Theological Dialogue between the Roman Catholic Church and the Orthodox Church that hammered out the agreement.

Their document explores both the primacy of the bishop, the metropolitan or patriarch, and the pope, and “synodality”—the collegial relations among bishops rooted in the communion of all the faithful in the Church.

Msgr. McPartlan, professor of systematic theology and ecumenism at the Catholic University of America, spoke with Aleteia about the document and its significance in advancing the hoped-for unity of Catholic and Orthodox.

The meeting in Chieti, which was the commission’s 14th plenary session, released its document Sept. 22. Would you summarize its document?

I think the document is very significant because it’s nine years since the last Catholic-Orthodox agreed statement—agreed at Ravenna in 2007—and in that time we have been working on what everybody knows is the most difficult issue of all between us, which is the relationship between synodality and primacy at three levels in the Church’s life—local, regional and universal—but especially wanting to address the universal level, where, of course, the major difficulties between East and West have occurred in history, with regard to the role of the pope as universal primate.

Two previous draft documents failed, in Vienna (2010) and Amman (2014), so this present agreement, at the third attempt, is very important. It’s quite a short document, but I think it’s quite substantial. It establishes that the basis for synodality in the Church is the life of God, the Holy Trinity, Father, Son, and Holy Spirit. So we have a very theological core to the text, and it says that primacy and synodality are interrelated and complementary at all levels of the life of the Church. It treats the local level, with the local Church around its bishop, then the regional level, where you have the metropolitan or the patriarch with the bishops of a region or a territory.

And then it goes to the universal level, and acknowledges the ancient taxis (the canonical order of bishops) of the five patriarchal sees [Rome, Constantinople, Alexandria, Antioch, and Jerusalem], with Rome in the first place. So Rome is acknowledged as having a universal primacy, but very much in the context of synodality, and it tries to indicate from the first millennium, which is the era that Catholics and Orthodox agree we are looking to for guidance, some very significant aspects of how the pope, as bishop of Rome, related to the wider Church. There are three things in particular that it mentions there:

In getting to this point, what concessions did each side have to make?

I don’t think that there’s a sense of any concessions, to be honest. I think there’s a genuine effort to find common ground.

I think there’s another very significant aspect of this text. Everybody knows that the Russian Orthodox Church did not accept the Ravenna document from 2007, and ever since 2007 it’s been unclear as to what exactly the common ground between us, Catholics and Orthodox, therefore was. What this document I think does is to restate, without referring to the Ravenna document, some of the fundamental gains of that document: the idea that synodality and primacy are interrelated; the idea that there are three levels in the Church: local, regional, and universal; the idea that there is indeed a primacy in each of those levels and therefore a universal primacy, which Rome has because of occupying the first place in the taxis. And so effectively what we’re doing there is reestablishing the common basis of our dialogue and getting all of the Churches back on the same page. Moscow, of course, took part in the meeting in Chieti. So we now have a common basis, clearly, for all of us, as we move forward in the dialogue.

There was a very good spirit in Chieti; there was a good sense of collaboration and a desire to take a step forward in our discussion.

Will this agreement necessitate that the Catholic Church change Her teaching regarding the role of the Bishop of Rome?

No. We have no mandate as Catholic delegates to the dialogue to change Catholic doctrine and we cannot possibly go against Catholic doctrine. We have to be absolutely faithful to Catholic doctrine as the Orthodox have to be faithful to Orthodox teaching. That’s why the dialogue process is a very careful one, sometimes a very slow one, of listening to one another. And I think one of the points that we have recognized is that the language of jurisdiction, which Catholics often associate with the pope, is very much a terminology of the second millennium. So when we look at the first millennium it would be anachronistic to speak about the universal jurisdiction of the pope. What instead we have to do is look at the very significant role the pope played in the communion life of the Church, a role that was recognized in the East as well as the West. Although it is clear that the pope related rather differently to the Church in the West than to the Church in the East, nevertheless the bishop of Rome was recognized in the East as playing an important role in the Church as a whole.

What must yet be resolved before we can mutually say we are in full communion with each other?

Clearly we have to deal with the second millennium in some way. This needs to be discussed next year by the joint coordinating committee to decide exactly what we will do next. We have been looking at the first millennium and we have established a very good common basis. The Chieti document says that we must now build upon that common basis from the first millennium, but the Church’s life continues, there has been a second millennium, in which there were developments, good and not so good, on both sides. So we need somehow to address the second millennium. The Orthodox, and especially the Russian Orthodox, very much want to address the question of uniatism [Eastern Christians who entered into union with Rome at various points in the second millennium, but kept their liturgy and traditions, such as the Ukrainian Greek Catholic Church]. The theological dialogue already produced an agreed statement on that important matter in 1993. There may well be more work we need to do on that. But the precise context in which to do that work has yet to be agreed.