‘I talk to God. How come he never talks back?’ 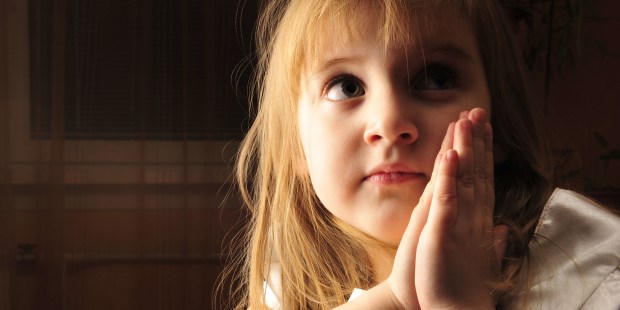 I struggled to explain, but my wife had the perfect answer

She’s all grown up now, but I still remember when my oldest daughter was a little girl lying in the littlest bed in the littlest room of our first little home in Falls Church, Virginia.

I had told her and her sister a story and I had kissed them goodnight and I was on my way out of the room when she said it.

“Dad, I talk to God. How come he never talks back?’

I felt the full weight of the moment. This was me entering the crucial phase of my fatherhood. I was being called upon to spiritually guide this young soul through life’s confusion.

Her question was one I too had faced, but I had never had to explain it to a 6-year-old. I braced myself, then began.

First, I tried this: “I am with you a lot without talking. Him, too.”

I can remember being paralyzed with fright as a child after a nightmare and laying awake staring into the dark. Then I would hear my dad cough in his room, and the fear would disappear. Just knowing he was there — his mere presence — changed everything.

Being in an empty house is utterly different from being in a house with somebody, anybody, in it. Presence changes everything.

If words changed everything, Facebook would make us happy; but it doesn’t. If words defined our interaction, when you told someone you went to a general audience with the pope, they would ask “What did he say?” But they don’t. They ask, “How close did you get?”

By the same principle, Sola Scriptura isn’t enough; you need his Real Presence in the Sacraments. Jesus’s silent presence has always been the best thing about him. If you piled up all the world’s Christian art in categories, the highest piles would be depictions of Jesus as an infant in his mother’s arms, when he could not yet talk, and dead on the cross, when he could no longer talk.

I told this to my daughter. She looked unconvinced.

So next I said this: “He speaks so much to us, too, though. In the Bible, and at Mass.”

Sometimes we hear Jesus’s words in our heart; but usually we read them in the Scriptures; the specific words he inspired for us to hear.

And not just words — beautiful, succinct words. Words for every occasion. Words that answer any longing. Words that surprise and challenge us. Words that are charged with the power of the Holy Spirit. Words for each of us to ponder alone and words for all of us to figure out together.

Our most valued communications from others are often the special words someone left for us: A love letter; an encouraging note from a parent; the scraps of thoughts a grandparent left in a desk when they died. Jesus left us so much more in his Word.

Her expression didn’t change, so I went further. “And he does talk to us!” I said. “He speaks through a thousand voices.”

There are the guaranteed voices of the Catechism and councils and encyclicals. Then there is the spiritual reading from his special friends, the saints. But then there is so much more.

Imagine if our whole family relied on one-on-one communication with grandpa for each person’s information and direction. That would be silly. It wouldn’t work. Or imagine a company where all communication had to come directly to me from the one highest boss. That would be inefficient and dictatorial and inhuman. God is not stupid or inefficient or dictatorial or inhuman.

He speaks to us from a whole community that is encircled, informed and in tune with his love, able to communicate across communication barriers, like the Apostles at Pentecost.

But she looked, if anything, even more worried by my impassioned vehemence — which by now had attracted my wife to the room.

It is a good thing she came. While I struggled to be the wise father, she effortlessly mastered the practical wisdom of motherhood, saw the desire of a little girl’s heart for communication, knew exactly the depth of her understanding, and cut to heart of the matter.

She said: “Tom, she’s just getting you going so she can stay up. Cecilia, that’s enough. It’s bedtime. Go to sleep.”

As I closed the door, Cecilia giggled.