What Pope Benedict XVI thinks we should wish for 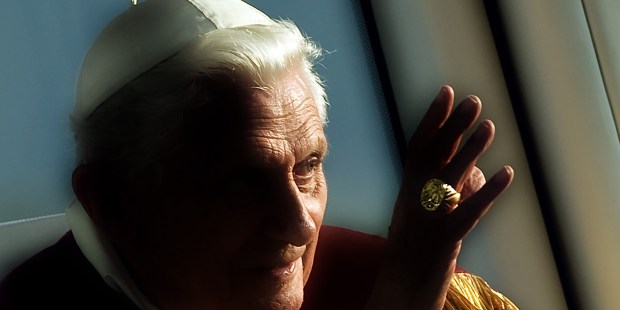 Hint: Solomon wanted one, too!

For a moment he was quiet.

The small, slightly stooped figure in white with a shock of like-colored hair pouring out from under his zucchetto remained still. Standing in this cavernous room beneath an imposing federal eagle and in front of a flag of black, red and gold, his eyes lit up. And glancing around the august chamber, a gentle smile came across his face. After all, it was a sort of homecoming.

The German Pope had arrived at Germany’s House of Parliament, the Bundestag.

To be sure, the world knew Germany was Benedict XVI’s home. Few could forget the unjust epithet, “Panzer Pope,” leveled at him upon his election as Supreme Pontiff of the Catholic Church. Though he was raised in a deeply Catholic family opposed to Adolf Hitler, forced into the Hitler Youth and drafted unwillingly (at 16) into war (a service from which he would desert), it counted for little in the eyes of his critics. They felt this Pope was suspect. Even a scurrilous photograph of a two-handed blessing he offered on the day of his ordination would be doctored and claimed as a Nazi salute.

Today, the Catholic German Pope would address the free German people. Here are some excerpts of what he said:

In the First Book of the Kings, it is recounted that God invited the young King Solomon, on his accession to the throne, to make a request. What will the young ruler ask for at this important moment? Success – wealth – long life – destruction of his enemies? He chooses none of these things. Instead, he asks for a listening heart so that he may govern God’s people, and discern between good and evil (cf. 1 Kg 3:9).

Through this story, the Bible wants to tell us what should ultimately matter for a politician. His fundamental criterion and the motivation for his work as a politician must not be success, and certainly not material gain. Politics must be a striving for justice, and hence it has to establish the fundamental preconditions for peace. Naturally a politician will seek success, without which he would have no opportunity for effective political action at all. Yet success is subordinated to the criterion of justice, to the will to do what is right, and to the understanding of what is right. Success can also be seductive and thus can open up the path towards the falsification of what is right, towards the destruction of justice. “Without justice – what else is the State but a great band of robbers?”, as Saint Augustine once said.

We Germans know from our own experience that these words are no empty spectre. We have seen how power became divorced from right, how power opposed right and crushed it, so that the State became an instrument for destroying right – a highly organized band of robbers, capable of threatening the whole world and driving it to the edge of the abyss. To serve right and to fight against the dominion of wrong is and remains the fundamental task of the politician. At a moment in history when man has acquired previously inconceivable power, this task takes on a particular urgency. Man can destroy the world. He can manipulate himself. He can, so to speak, make human beings and he can deny them their humanity. How do we recognize what is right? How can we discern between good and evil, between what is truly right and what may appear right? Even now, Solomon’s request remains the decisive issue facing politicians and politics today.

For most of the matters that need to be regulated by law, the support of the majority can serve as a sufficient criterion. Yet it is evident that for the fundamental issues of law, in which the dignity of man and of humanity is at stake, the majority principle is not enough: everyone in a position of responsibility must personally seek out the criteria to be followed when framing laws. In the third century, the great theologian Origen provided the following explanation for the resistance of Christians to certain legal systems: “Suppose that a man were living among the Scythians, whose laws are contrary to the divine law, and was compelled to live among them … such a man for the sake of the true law, though illegal among the Scythians, would rightly form associations with like-minded people contrary to the laws of the Scythians.”

This conviction was what motivated resistance movements to act against the Nazi regime and other totalitarian regimes, thereby doing a great service to justice and to humanity as a whole. For these people, it was indisputably evident that the law in force was actually unlawful. Yet when it comes to the decisions of a democratic politician, the question of what now corresponds to the law of truth, what is actually right and may be enacted as law, is less obvious. In terms of the underlying anthropological issues, what is right and may be given the force of law is in no way simply self-evident today. The question of how to recognize what is truly right and thus to serve justice when framing laws has never been simple, and today in view of the vast extent of our knowledge and our capacity, it has become still harder…

How do we recognize what is right? In history, systems of law have almost always been based on religion: decisions regarding what was to be lawful among men were taken with reference to the divinity. Unlike other great religions, Christianity has never proposed a revealed law to the State and to society, that is to say a juridical order derived from revelation. Instead, it has pointed to nature and reason as the true sources of law – and to the harmony of objective and subjective reason, which naturally presupposes that both spheres are rooted in the creative reason of God…

Man does not create himself. He is intellect and will, but he is also nature, and his will is rightly ordered if he respects his nature, listens to it and accepts himself for who he is, as one who did not create himself. In this way, and in no other, is true human freedom fulfilled…

As he assumed the mantle of office, the young King Solomon was invited to make a request. How would it be if we, the law-makers of today, were invited to make a request? What would we ask for? I think that, even today, there is ultimately nothing else we could wish for but a listening heart – the capacity to discern between good and evil, and thus to establish true law, to serve justice and peace.

Pope Benedict XVI reminded his nation (and each of us) to wish for a listening heart.