Meet Raymond Nonnatus, the saint who was “not born” 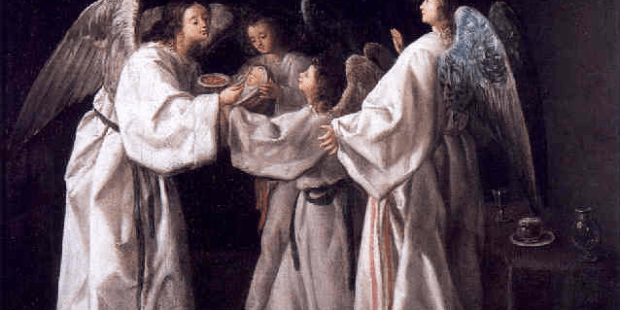 St. Raymond Nonnatus surrendered his life for that of Christians captured by Muslims

The Order of the Blessed Virgin Mary of Mercy, more commonly known as the Mercedarians, was founded in the year 1218 by St. Peter Nolasco. His purpose was the redemption of Christians captured and imprisoned by the Muslims. To become a Mercedarian requires an additional commitment on the part of those wanting to join the order. It is known as their “fourth vow.”

In addition to the traditional vows of poverty, chastity and obedience, the Mercedarians also vow to willingly trade their lives for the lives of others. One of the original Mercedarians, St. Raymond Nonnatus, did just that.

If his surname, “Nonnatus,” seems strange, it’s because it is Latinized and means “not born.” In 1204 his father brought him into the world with a dagger, opening the womb of his mother, who died in labor.

Raymond’s father owned several farms and he wanted Raymond to manage one of them. Raymond, however, was drawn to the religious life. He possessed a deep devotion to God and the Blessed Virgin. Nearby was the ancient chapel of St. Nicholas and he would frequently go there to pray and meditate. Eventually his father realized that his son would not be a farmer and gave in to the boy’s wishes to join the Mercedarians, in Barcelona.

Emboldened by his father’s permission, Raymond told the Mercedarians that he had already taken a private vow of perpetual virginity and was determined to join them. He was accepted and (legend has it) St. Peter Nolasco, the founder of the Mercedarians, was the one who presented Raymond with the Order’s habit.

Still in his 20s at ordination, Father Raymond, in 1224, began his first redemption journey to Valencia, which had been conquered by the Moors. Raymond Nonnatus managed to gain the freedom of 233 captive Christians. He was just beginning his work.

In 1226, he traveled to Algiers, in Northern Africa, offering to become a prisoner in order to free another 140 captives. Three years later he went back to Algiers again. This time he was accompanied by his friend, Friar Serapion.

Friar Serapion had become a Mercedarian after having fought alongside Richard the Lion-Hearted during the Crusades. He had decided he would rather surrender his life for captives than kill. Together Serapion and Raymond managed to free 228 captives from the prisons and dungeons of Tunis.

St. Raymond’s last redemption was in 1236. It was in Algiers again and this visit is not known for the number of freed prisoners. Rather, it is known for the torture Raymond was forced to endure. Having exhausted all funds, Raymond stayed behind as a hostage. He spent his time in the dungeons preaching the message of Jesus and Christianity. His captors would have none of it.

His torturers used a searing iron to bore holes through his upper and lower lips. Then they placed a padlock through the holes in an attempt to keep the suffering man quiet. The padlocks remained in place for eight months at which time ransom was received for Raymond’s release. He was returned to Spain in 1239.

Raymond Nonnatus died toward the end of August 1240; the exact day is unknown. He was 36 years old. Tradition has it that the villagers, the local count, and the friars all claimed his body. They resolved the dispute by placing Raymond’s body across the back of a blind mule. The mule was let loose and wherever it stopped would be Raymond’s burial place.

The mule ambled slowly to the chapel where Raymond Nonnatus had prayed so frequently as a teenager. That is where he was buried and many miracles at the site have been attributed to his intercession.

St. Raymond Nonnatus was canonized a saint by Pope Alexander VII in 1657. He is the patron saint of childbirth, children, and pregnant women. He is also patron for priests defending the seal of confession.

St. Raymond Nonnatus, please pray for us and all of the unborn.