My son is so much more than Down syndrome 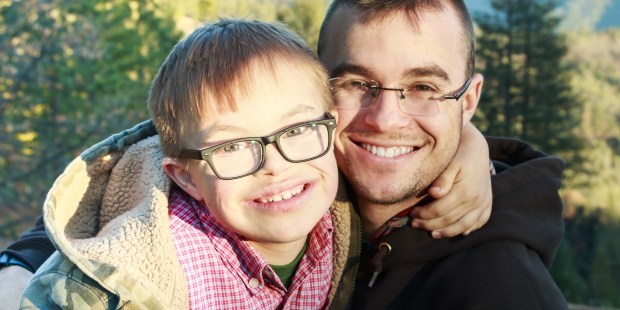 He didn’t and doesn’t know or care about his capacities being somewhat limited. And his siblings fully expect that he will do everything they do.

My son is 8 years old. He loves super heroes, dinosaurs and running faster than I can. Of my 10 children, he is the most willing to bring up or down the garbage cans on trash day, or to set the table.

Paul has Down syndrome. When he was younger, I learned to let him move through things at his own pace. But in trying to avoid the problem of pushing him to the point of discouragement, I hit upon the opposite snare — not pushing him enough. Parenting a child with special needs can be a tight-rope walk and when you have a child who doesn’t speak much, it’s hard to know where the right balance is in each moment.

Milestones came slowly for Paul and as his younger sister lapped him, I ceased to push much at all. I’d surrendered on potty training and on many things. I had a list of nevers in my head. Some I’d put there; others, other people had — nevers that kept me from aiding my son to be what he could be.

Or they would have.

Except my son has two advantages that countered my parental acedia. He didn’t and doesn’t know or care about his capacities being somewhat limited. And his siblings fully expect that he will do everything they do.

One would have thought the miracle of successfully potty training over the summer would have shaken me into recognizing that Paul can do more than I know. But it wasn’t quite enough. His brothers and sisters, though, saw him becoming more like them, and took it to heart.

I came outside one day to find them teaching him to ride a bike. They got him to learn to set the table, to work a Wii-U and Xbox controller — and he plays Super Smash Bros. Brawl better than me. They demanded he chew smaller bites to not be gross, whereas I’d just enabled him to not worry about it by cutting his food into bite-sized pieces.

“He’s not a baby,” my daughter said when she saw me preparing to cut up his sandwich.

He’s not a baby. I put his sandwich out uncut. He’s not a baby. I added a butter knife to his setting at the table, so he could put cream cheese on his bagel himself. It became the theme as they hawked me into treating him more and more as an 8-year-old.

This past week, we visited a friend who owns a dog. She told Max to sit and stay. The dog neither sat nor stayed. Paul turned to the dog and firmly said, “Sit! Stay!” The dog still didn’t sit, but it stayed put. The dog heard his authority. I heard his 8-year-old true voice.

The next day, I went to an IEP (individualized education plan) meeting. It took place before school, so Paul and three of his sisters attended as well. The teacher went through her goals for his school year.

At Mass later on, Paul genuflected in imitation of his father, and sang along even if we could not make out the words. I know some sign and when I signed the prayers, he imitated me. He also bowed to the altar and I could see some interest in presenting himself for the Eucharist.

The IEP, his siblings, the Mass and Paul himself are showing me: He is more, he has always been more.

When we sit for Sunday brunch after Mass, he makes sure everyone comes to the table. He will leave and hunt down the straggler teen or college sibling still attached to some electronic device. He does not take “No” or “I’m not hungry” for an answer. No one has to eat, but everyone has to show.

Every once in a while, Paul himself helps pull the veil from my eyes to reveal what Paul is — and it is so much more than Down syndrome.