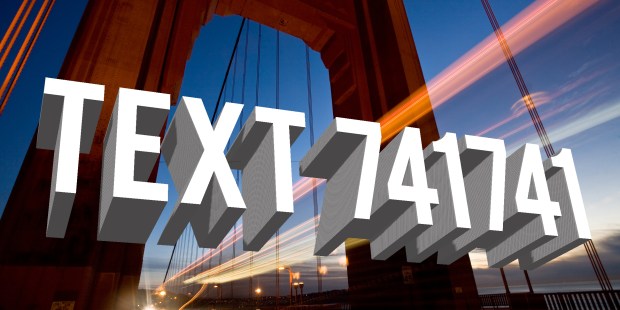 Could a text message save someone from committing suicide? That’s what officials at the Golden Gate Bridge are hoping.

They say the number of people under 25 who come to the San Francisco landmark to end their lives is five times what it was in the year 2000, and since many young people prefer texting to speaking on a phone, it seems natural to try to reach out to troubled youth through that means.

It’s one measure that’s being implemented at the bridge while cost concerns continue to stall a hoped-for “suicide net,” according to National Public Radio.

There are signs on the bridge urging anyone considering suicide to text the number 741741. That’s the number for the nationwide Crisis Text Line, and at the other end are volunteers such as Ellen Kaster, who was answering texts when an NPR reporter visited her San Francisco apartment.

“Right now I have a texter who has struggled with drug addiction and has gone through phases of being clean and relapsing,” she says.

The texter tells Kaster he feels suicidal. This is a code orange, which means her supervisor — a social worker — has now joined in to monitor the conversation. They’ll call police if the suicide threats intensify.

Kaster says for many, texting these emotional conversations is easier.

“It can feel very vulnerable, especially for the younger generation to actually dial a real phone and talk to somebody, so there’s something very impersonal about text that’s very natural,” she explains.

NPR explained that when a suicide threat is texted from the Golden Gate Bridge, the hotline counselors contact the bridge patrol. That team, which is constantly on the lookout for people who might be suicidal, is led by Capt. Lisa Locati.

In the bridge command center, Locati thumbs through a binder full of printed Facebook pages. These are people whose loved ones have called in, worried they might jump.

What really bothers Locati is how many are just kids who don’t have much perspective on life.

“They got a bad grade in class, broke up with their boyfriend or girlfriend,” she says. “There’s a lot of bullying going on in the age group.”

Locati says that can be devastating to some young people.

“You want so much to make the connection and convince this person that dying is not the answer, at least today,” she says. “Just give tomorrow a chance. So, yeah, it’s very exhausting.”

Kimberlyrenee and Manuel Gamboa, whose 18-year-old son, Kyle, jumped off the bridge three years ago, killing himself, are supportive of the new prevention measure. Kimberlyrenee says she doesn’t know whether Kyle would have reached out to the text line, but he was on his phone that morning.

The couple still have his phone, and Kyle’s friends are still texting, as if they believed the young man can still hear their consoling words.

“Love you brother, I really don’t know what happened. I miss you, I wish you were here,” says a recent one.

Kimberlyrenee hopes that if Kyle’s friends will reach out to a phone he hasn’t answered in three years, young people feeling desperate will text for help, and someone will answer.