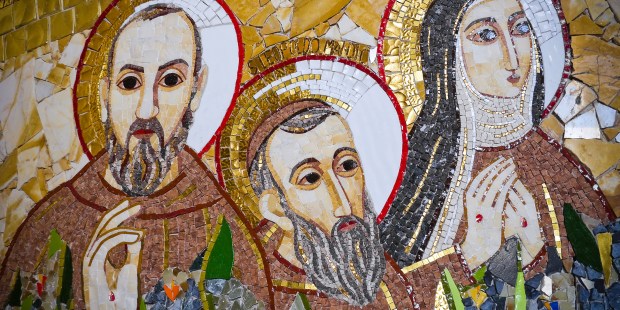 Union with Christ is the mark of holiness, and some saints are asked to reflect this union even in their bodies.

Stigmatics are those holy men and women who are given some or all of the five main wounds Christ endured in the crucifixion (in his hands, feet and side). Sometimes they endure other wounds, such as those he received from the crown of thorns.

Some stigmatics are well known, such as Padre Pio and St. Francis of Assisi.

WATCH: A day in the life of Padre Pio

Others, such as the saint we celebrate today, St. Mary Frances of the Five Wounds of Jesus, and St. Faustina, whose feast was Wednesday, are lesser known.

Here are five stigmatists you might not know about, including these two women we celebrate this week:

Born in 1715, Mary Frances was abused by her father, who was a violent man. She became a Franciscan tertiary at the age of 16, rather than submit to her father’s plans of a forced marriage.

At age 38, she and another tertiary became the housekeepers for a local holy priest. Mary Frances had visions, including of St. Raphael the Archangel, who cured some of her physical afflictions. She bore the wounds of Christ’s Passion, and was a prophetess, most famously known for her predictions regarding the French Revolution.

In 1876 she was canonized by Pope Pius IX, and was the first woman from Naples to be declared a saint by the Church.

St. Faustina, whose feast we celebrated Wednesday, is well known for the visions of Jesus that eventually led to a renewed devotion to Divine Mercy across the globe. The Diary of St. Faustina and the image of Jesus that she helped to spread has earned her the title of “Apostle of Divine Mercy.”

What is less known about this saint, however, is the fact that she secretly experienced the stigmata.

According to her biography on the Vatican web site: “The years she had spent at the convent were filled with extraordinary gifts, such as: revelations, visions, hidden stigmata, participation in the Passion of the Lord, the gift of bilocation, the reading of human souls, the gift of prophecy, or the rare gift of mystical engagement and marriage. The living relationship with God, the Blessed Mother, the Angels, the Saints, the souls in Purgatory — with the entire supernatural world — was as equally real for her as was the world she perceived with her senses.”

Despite all of these experiences, St. Faustina was able to keep everything in perspective as one diary entry (1107) makes very clear: “Neither graces, nor revelations, nor raptures, nor gifts granted to a soul make it perfect, but rather the intimate union of the soul with God.”

WATCH: St. Faustina shows how radical the message of Divine Mercy was

Born in 1660 as the youngest of seven sisters, Ursula Giuliani was only three years old when those around her started to notice her profound compassion for the poor. At the age of 17, she entered the monastery of the Poor Clares, and it was there she took the name Veronica in honor of the the Lord’s Passion.

Sr. Veronica began to experience the wounds of the Crown of Thorns in 1694 and the five wounds of Christ just three years later. According to Saint Stories for All Ages, “Veronica was humiliated by the stigmata itself and by her bishop’s rigorous testing of her experience. He removed the saint from ordinary community life and put her under constant observation. When he decided that the phenomena were authentic, he allowed her to return to normal convent life and continue her service to her sisters.”

She was canonized by Pope Gregory XVI in 1839.

In 1802, at the age of 28, Anne Catherine entered religious life with the Augustinian nuns, but within nine years she was plagued by physical illnesses that forced her to stay bedridden. The combination of her weak health and her zealous adherence to the convent’s rule of life brought the disdain of some of her religious sisters, but both helped her to grow closer to Christ.

In 1813, the stigmata began to appear on Anne Catherine, and she was subjected to numerous tests and examinations. The bleeding stopped in 1818, and the wounds completely healed, except for a “Y” shaped mark near her breastbone, which matched the shape of a cross in a nearby parish.

Anne Catherine’s life was also marked by numerous visions and apparitions, starting with her conversations with Jesus and the Souls in Purgatory when she was a child.

Despite excelling at her school work and desiring greatly to enter religious life, Gemma was turned down by the Passionist Nuns due to her poor health and eyesight. At the age of 20, she developed spinal meningitis. When she was completely healed, she attributed it to the Sacred Heart of Jesus and the intercession of St. Gabriel of Our Lady of Sorrows.

At the age of 21, she began to show signs of the stigmata, and frequently reported visions of her Guardian Angel, Jesus, and the Blessed Virgin. Due to her declining health, her confessor directed her to pray for the disappearance of her stigmata. She followed his directive, and the marks quickly ceased.

She later wrote of her experience with the stigmata, “I felt an inward sorrow for my sins, but so intense that I have never felt the like again … My will made me detest them all, and promise willingly to suffer everything as expiation for them. Then the thoughts crowded thickly within me, and they were thoughts of sorrow, love, fear, hope and comfort.”

The experience of stigmata is a mysterious and awe inspiring gift given to a select few. Taking some time to get to know those who have been given this gift is a great way for us to enter into meditation on the very wounds and Passion of Christ.