The Prayers within the howls: Alter Bridge’s new album leads to a soulful understanding 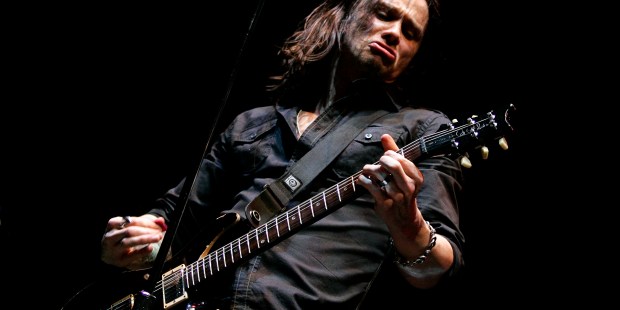 Be as loud as you want, something inside us won’t be silenced…

Don’t judge me, but I love heavy metal music. In fact, I spent the first half of my adult life completely immersed in the genre. It has a certain guttural power that other forms of music lack, and there’s something deeply visceral and rebellious that is at its heart. All I know is that I love it.

So when I reverted to the Catholic faith and I began to seek out that relationship of all relationships with Jesus Christ, certain ‘things’ started to nag at me as my conscience became awakened. For example, ‘Man in a Box’ by Alice in Chains, once one of my very favorite songs revealed itself to be diametrically opposed to what I believed and Whom I loved. I had to scratch that one from the playlist –the first of many.

It became pretty obvious, pretty fast that there was a lot of atheism and Satanism to be had within music style I held so dear. I may have known that all along, but now it was a real problem for me. How could I square listening to these things and profess my love of God ?

I was forced to cut away a lot of dead branches as it turned out, and compromise. I was left with bands that were gently agnostic and atheistic as opposed to straight up evil. It’s a work in progress.

Which leads me to today.

Alter Bridge — basically the remains of the band Creed but with Myles Kennedy fronting rather than the ill-fated Scott Stapp — is one of my favorite ‘compromise’ bands. And today, October 7th, is a big day in the Alt. Metal world; it’s the day they release there long overdue 5th album, something I was really excited about.

A big Google search relating to them is “Is Alter Bridge a Christian Band?” I confess, I searched this myself, only to be let down big time. So why do so many people do this search? Well, it’s because of some of their lyrics, which are really prayers.

It always perplexed me. Why on earth do self-professed atheists and agnostics include what can be loosely defined as ‘prayers’ in their songs? What the heck?

But today it dawned on me. The Soul. You can say what you want, and act as you will but you still have a Soul. And regardless of how many watts of amplification you have on stage and how thunderous the sound of the exhaust on your Ferrari, you can’t silence it completely. It cries out to be united with the One who created it; it longs to be in union with the One who breathed it into existence at that Sacred moment of conception where man, woman and God join in the act of creating the worlds greatest natural resource: the human being.

You can pretty much kill your conscience and misinform your intellect, but the Soul will always remain. I think this is why from time to time even the most vitriolic bands utter words seeking out the Divine.

To deny God’s Presence is to deny oneself authentic peace and joy, and there is enough evidence in the Metal world to convict them of that: Suicide, addictions, pornography; a world that tears itself to pieces all in an effort to silence the Soul, using every means at its disposal to accomplish this.

Read more: The night I realized I was becoming a Pharisee

But the Soul does not remain silent. The efforts to silence it cause great pain and suffering because it resides at the very core of who a person is. You can’t simply rip it out.

It’s interesting really, to go back and listen to my old favorites, knowing this. It’s also heartbreaking. Heartbreaking that someone would willfully try to deny themselves joy, and consolation, and the hope of eternity. But this isn’t a new story, it’s been a reality since the dawn of time

So my friends, please pray for all those who are in this self deluded hell on earth, whether they are family members, rockstars, celebrities or people you know. Their Souls need the Grace that you can help bring through your prayers.

And since today is the Feast of Our Lady of the Rosary I would enlist her loving intersession so that what may now be the prayer of the atheist be recognized for what it is, the voice of the very real Soul.