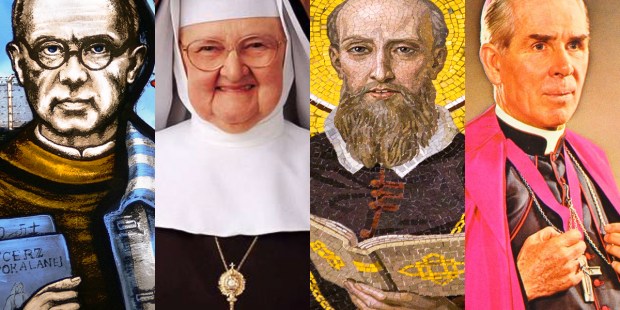 It was about much more than “clicks” for these communicators

In October, through the Pope’s Worldwide Prayer Network, Pope Francis has asked the world to pray for journalists. In particular he asks us to pray “that journalists, in carrying out their work, may always be motivated by respect for truth and a strong sense of ethics.”

This prayer intention has become especially relevant in an age ruled by the internet and social media. Fueled by the need for stories to “go viral,” some news agencies have compromised content (and sometimes the truth) for bias and sensationalism in the quest for “clicks.”

Now more then ever, we need holy models of men and women who used their media platforms to serve the truth and to communicate to the masses with integrity, and a sense of ethics.

Here are four such examples of holy individuals who sought always to communicate what was true, good and beautiful, not succumbing to the temptation to target popular interest in passing trends, over eternal realities.

From the very beginning of his priesthood, Fulton Sheen used various forms of media to communicate the truths of the Catholic faith. He started first with a weekly radio broadcast called The Catholic Hour, which became very popular and reportedly reached millions over two decades.

In 1951, Sheen expanded his message on television after being appointed Auxiliary Bishop of New York with his show, Life is Worth Living. In 1952, his efforts (which were unpaid and without a script) won him an Emmy Award for “Most Outstanding Television Personality.” The show ran until 1957, attracting millions of viewers who would tune in each week at 8:00 p.m. for Sheen and his trusty blackboard (aided, as always, by his “angel” who would erase the blackboard off camera).

Sheen was well known for his teaching style that was rich in the tradition of the Catholic Church, often pointing out the many errors of modern philosophy and the dangers of communism. At the same time, his oratorical skills captured audiences no matter what current subject he talked about and his frequent jokes would always lighten the mood.

After founding a religious monastery in Alabama, Mother Angelica was inspired to start spreading the faith through popular forms of communication. She started first with a weekly radio program, but then was inspired to expand into television after visiting a Baptist-run television station. After seeing the entire studio, Mother Angelica quipped, “Lord, I gotta have one of these!”

She started first by filming a television show for the Christian Broadcast Network (CBN), but then decided to start her own network in hopes of spreading the Catholic faith throughout the United States (and beyond).

Mother Angelica’s humble beginnings would lay the foundations for the Eternal World Television Network (EWTN), which now broadcasts internationally and has a worldwide presence in radio, television, and print. Her weekly show Mother Angelica Live was her most popular show, a mix of Catholic teaching and personal advice presented with a humor that surprised many.

Most widely known for writing the spiritual classic Introduction to the Devout Life, Francis de Sales was proclaimed the patron saint of journalists (and all writers) by Pope Pius XI in 1923. This possibly surprising proclamation was based on the 16th-century saint’s ability to write and defend the truth against Protestants who lived in the area. In particular, the manner in which Francis wrote reflected his motto as a bishop, “He who preaches with love, preaches effectively.”

In his encyclical, Rerum Omnium Perturbationem, Pope Pius XI challenged all journalists to imitate Francis de Sales, stressing the need to defend the truth with charity.

“It is necessary that they, in their writings, imitate and exhibit at all times that strength joined always to moderation and charity, which was the special characteristic of St. Francis…In the first place…each writer should endeavor in every way and as far as this may be possible to obtain a complete comprehension of the teachings of the Church. They should never compromise where the truth is involved, nor, because of fear of possibly offending an opponent, minimize or dissimulate it. They should pay particular attention to literary style and should try to express their thoughts clearly and in beautiful language so that their readers will the more readily come to love the truth. When it is necessary to enter into controversy, they should be prepared to refute error and to overcome the wiles of the wicked, but always in a way that will demonstrate clearly that they are animated by the highest principles and moved only by Christian charity.”

From the very beginning of his religious life, Maximilian Kolbe wanted to produce publications that honored the Immaculate Virgin Mary and proclaimed the truth. In 1922, he founded a monthly periodical named Knight of the Immaculate, which proved to be just the beginning of his publishing endeavors. Later on he would publish a similar edition in Japan, and his large monastery in Niepokalanów began to publish in the 1930s a daily newspaper called The Little Daily.

Knight of the Immaculate grew to a publication of 800,000 copies by 1938 and Kolbe’s daily newspaper would reach a circulation of 225,000 on the weekends. He had many other smaller publications and in 1938 founded a radio station. His media endeavors featured inspiring stories and meditations as well as articles pointing out the harmful ideologies that were infiltrating Poland.

It is no surprise when the Nazis invaded Poland that they were not pleased with his publications, but allowed him one last printing before sending him to Auschwitz. In it, Maximilian Kolbe wrote, “No one in the world can change Truth. What we can do and should do is to seek truth and to serve it when we have found it. The real conflict is the inner conflict. Beyond armies of occupation and the hecatombs of extermination camps, there are two irreconcilable enemies in the depth of every soul: good and evil, sin and love. And what use are the victories on the battlefield if we ourselves are defeated in our innermost personal selves?”