What could Blessed John Henry Newman and Saint Mother Teresa have in common? 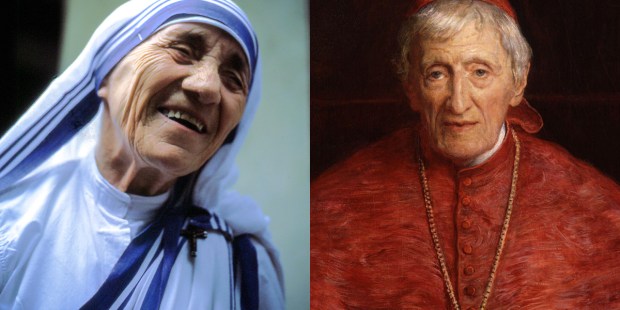 The former Oxford don and the humble religious sister shared a common holiness and love for the poor.

Just a few weeks after Pope Francis canonized Mother Teresa of Calcutta, I received a mailing from Franciscan Media promoting their Mother Teresa Microsite. The mailing included a holy card with the radiant face of St. Teresa on the front side. The other side, with the appropriate title, “Radiating Christ,” featured a prayer with the subtitle: “Mother Teresa prayed this daily with her Sisters”:

Help me to spread Thy fragrance everywhere I go.

Flood my soul with Thy spirit and life.

Penetrate and possess my whole being so utterly

that all my life may only be a radiance of Thine.

Shine through me, and be so in me

may feel Thy presence in my soul.

Let them look up and see no longer me

At the bottom of the prayer, the author’s name: Blessed John Henry Newman.

One initial reaction could be: What would Mother Teresa of Calcutta, the saint of the slums, have in common with Blessed John Henry Newman, the Oxford don and university president in Ireland? She was the humble sister with simple words of love and compassion; he was the brilliant controversialist and master of English literary and rhetorical poetry and prose.

What could 19th-century Birmingham have to do with 20th-century Calcutta?

Blessed John Henry Newman was, for all his other intellectual and controversial achievements, as Pope Benedict XVI reminded us six years ago at his beatification, a “pastor of souls.” As an Anglican curate and vicar, Newman worked among the poor, especially in the village of Littlemore outside Oxford. He moved his widowed mother and his unmarried sisters to his parsonage there to help educate, feed, and clothe the poor of the parish. Newman built a chapel for the village and organized a school.

Then as a Catholic priest, Newman served in industrial Birmingham. In 1864, his bishop, William Ullathorne, commended him for his work at the first Oratory of St. Philip Neri in England: “Poor schools and other pious institutions have grown up in connection with it, and, moreover, equally at your expense and that of your brethren, and, as I have reason to know, at much inconvenience, the Oratory has relieved the other clergy of Birmingham all this while by constantly doing the duty in the poor-house and gaol [jail] of Birmingham . . . the mission and the poor school at Smethwick owe their existence to the Oratory. And all this while the founder and father of these religious works has added to his other solicitudes the toil of frequent preaching, of attendance in the confessional, and other parochial duties.”

Of course in the communion of saints, Saint Teresa of Calcutta and Blessed John Henry Newman would have many things in common: holiness, love of God, love of neighbor, obedience to the Catholic faith, devotion to other saints, prayer and adoration of Jesus, frequent use of the Sacraments of Confession and Holy Communion, etc. They also have this love and care for the poor in common.

When Blessed John Henry Newman is canonized—and a second miracle is under review now—it will be for his holiness of life rather than the beauty of his prose. In England, his memorial is on October 9, the anniversary of his conversion to Catholicism. I look forward to the day his memorial is celebrated throughout the Church and others will see the radiance of Christ shining through him.