Hope (and life) in a bin of donated maternity clothes 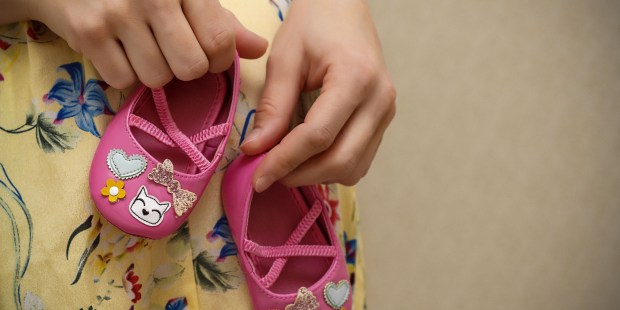 Allison called the pregnancy center where I help out. She wanted to know how much we charge to talk to someone, and for an ultrasound. I told her all our services are free and that we would be happy to help her. The office was about to close so I asked her if she could she could come in the next day. No, she had to work the next day and asked if she could come right in.

Twenty minutes later Allison arrived with her friend. Clearly pregnant, she started sharing her story as soon as she sat down. She was in a “going nowhere” relationship with a guy who already had two children with someone else, and had been urging her to abort this one.

“Yesterday was the third time I went to have an abortion,” she said. “The first time I didn’t have enough money. The second time they said they were too busy that day; they told me to come back another day. And yesterday they said I’m at least six months and I thought, OK God you’re trying to tell me something. I don’t think I’m supposed to have an abortion. And she (pointing to her friend) said, ‘Well God wouldn’t give you something you can’t handle. Let’s get out of here.’”

Wow. Allison had initially had no hope — or interest — in keeping this child but here she was before me. I told her we would start praying immediately for God to be in this situation and that we would arrange an ultrasound right away. I brought out a bin of donated, neatly folded maternity clothes for her to choose from, as she was clearly getting too big for the pants she had on. Her face lit up in gratitude as she chose several pairs of pants and tops.

I explained to these young women that the reason pro-life crisis pregnancy centers are free is precisely because abortion centers aren’t — their motive is profit; ours is simply life. Abortion facilities like the one Allison had gone to won’t show young women models representing where their babies are in gestation, or show them ultrasounds, because they don’t want pregnant moms to think too deeply about what they are doing.

Abortion facilities facilitate only one thing: abortion. They don’t keep clothing in store for needy moms. We facilitate life, and to do so we offer real help, so a pregnant woman really knows she has options — to either keep their child or place him or her for adoption. Our motivation is just the truth. I shared with her that we could assist her with diapers, a bassinet or crib, a car seat, and baby clothes.

Having a baby is not what Allison planned for herself at this point in her life, but she is rising to the occasion. When she said she was so relieved that she hadn’t gone ahead with the abortion, I was able to truthfully tell her that not one of our clients who had a baby in less-than-ideal circumstances ever said she wished she had aborted, but that we frequently encounter women who did have an abortion (or abortions) and desperately wished they had not.

Checking in with Allison a week later, she sounded great. With her ultrasound, she had been given a chance to see her tiny baby boy moving around. She received a photo of her son and a due date of late November. She’s since spoken to the baby’s father who isn’t thrilled she’s decided to keep this child, but at least listened and said he’d do what he can financially to help out. She also spoke to her grandmother who lives nearby and found that she was supportive, offering to be there when the baby is born and agreeing that God would be happy she hadn’t taken the life of one of his “little ones.” Her best friend is also more than willing to help out in any way she can.

The young woman who came to us feeling confused and hopeless has started planning ahead, looking into childcare where she attends college classes, as well as maternity leave from her job. Having resisted being told, “This baby will ruin your life,” Allison is discovering that it is helping her to embrace it.