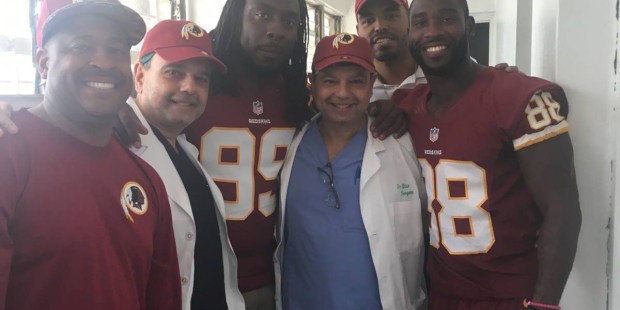 Hope that other pro-ball teams will step up

Snyder knew that Garcon still had family living in Haiti and told him after Sunday’s game, “I’ll get someone to fly if you can take it down there and you can help out.” Eager to do what he could to help those in need, Garcon immediately started making arrangements for the flight.

This is not the first time that Garcon has helped the poor and suffering in Haiti. After the earthquake in 2010, Garcon created the “Pierre Garçon Helping Hands Foundation…to bring enduring education, health and community programs to the people of Haiti; to provide long-term sustainable initiatives that will continue to positively influence the lives of Haitians.”

Before leaving on Monday (typically the “day off” for players), Garcon contacted Project Medishare to see what relief workers needed. The organization responded by asking for, “medical supplies, especially saline to keep patients being treated for cholera hydrated intravenously.” Over 1,000 deaths have already occurred and local officials fear an outbreak of cholera, which could raise the death toll each day.

Garcon and Francois then took what they needed from the team’s doctor (boxing up medical supplies from their own locker room) and flew down to Haiti with senior vice president of communications Tony Wyllie. This was the second time the Redskins sent aid to those devastated by Hurricane Matthew, as the team had already sent supplies on Saturday to the Bahamas.

Mr. Dan Snyder and the @redskins training staff providing Haiti with much needed medical supplies that we will hand deliver today in Haiti to @medishare4haiti (Me and Ricky Jean Francois) #PrayForHaiti #HTTR (repost to spread the word Haiti needs it)

While in Haiti, Garcon also checked in on family members. Some were safe, while others he could not get in touch with. However, he is hopeful that everyone will be OK in the end.

Garcon was impressed with the efforts there and how everyone is pulling together to help one another.

“One of the ladies from the hospital told us they came together before the storm and had everything prepared and now they’re just trying to open up roads…and get more supplies out, but now I’m hearing they’re doing air drops in different areas…and the best part is everything is coming together the way it should have done a long time ago even when the earthquake hit, but just to see it yourself, to see it with your own eyes, just blessed.”

The Redskins wanted to do what they could with the abundance of their resources to help those in need. Garcon hopes that other professional teams will take up the challenge and send aid to the devastated country of Haiti.

Ravens linebacker Elvis Dumervil has already pledged his support after hearing that the 58 homes he helped build in the offseason withstood the hurricane and provided shelter to thousands of people during the storm.

Dumervil has teamed up with Seattle Seahawks Cliff Avril, the NFL and the charitable organization New Story to raise money for more homes in Haiti. According to their website, “Since Hurricane Matthew hit Haiti on October 4th, NFL leaders have come together to build safe homes and a sustainable community with New Story. Each home is only $6,000.” All money raised will go directly towards the construction of homes that are built by local workers with local materials to create permanent solutions that endure.

In the midst of the death and destruction in Haiti, the work of these NFL players is truly a light in the darkness.