Catholic priest giving away every penny of prizemoney 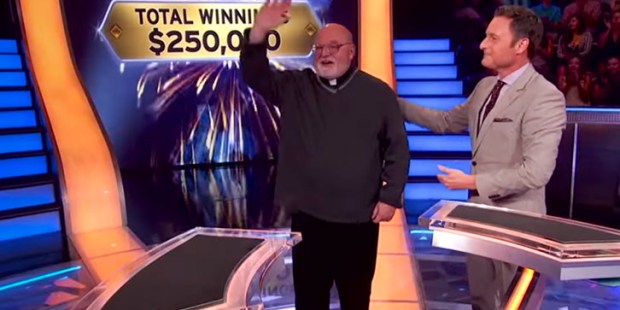 Winner of “Who Wants to be a Millionaire!” is storing up riches in heaven

How fun is this? Fr. Bill Matheny from Bridgeport, West Virginia, just won it big on the TV game show, Who Wants to be a Millionaire! And better than that, he’s giving away every penny of his prize money.

Talk about persistence. The 61-year-old priest from All Saints Church had been trying to be a contestant on Millionaire for 17 years. It was a personal goal of his to be on the show, knowing his love of trivia could pay off. He’d been watching the show ever since it debuted. This year he wasn’t going to bother trying out again, but a friend convinced him to give it another try.

Not only did he win $250,000, but he announced he’s giving it all to his alma mater, St. Francis of Assisi near Charleston, West Virginia.

“It’s weird. Certain things I can just remember, no problem,” Fr. Bill said to the Charleston Gazette-Mail. “But don’t ask me where I laid my pen. My short-term memory is terrible.”

Growing up, Fr. Bill attended St. Francis of Assisi school, where his teachers noticed his knack for memorizing things. He spent his spare time memorizing presidents in chronological order and all sorts of other lists.

When he was in third grade, his grandfather came home with a road atlas, and the two memorized state capitals, the largest cities in every state, the number of counties in every state and the total square miles of every state. As he got older, he loved trivia and being in trivia tournaments.

Fr. Bill competed on the show over the summer and the episode aired September 29th. He came back to his grade school to watch the show with the school lunchroom full of students, teachers, friends and family members watching along with him. He kept answering question after question correctly, with the packed lunchroom erupting in cheers. He was asked what an ailurophile is. He knew the answer — a lover of cats — because he’d just submitted that as a possible question to a team trivia event. By the end of the half-hour episode, Fr. Bill had won $250,000!

In an interview on Relevant Radio, Fr. Bill credited his alma mater with his Catholic faith, his love of learning, and love of reading.

“Academically, we were pretty advanced. I didn’t know that at the time, but I talked to my friends who went to public schools, and we were always about a year ahead of them,” he said. “I was always encouraged to learn here. They could tell I had God-given gifts.”

Fr. Bill started trying out for the show soon after he first became hooked on watching it. He’d make it through the preliminaries, but his fingers were too slow. He knew all the answers, but he just wasn’t as fast as the others. He kept trying for 17 years, each time falling short. This year, he planned to give up but a friend suggested he try one more time. “I told people in churches from around the state to say prayers for me….”

Fr. Bill surprised host Chris Harrison and the Millionaire audience with the wonderful announcement that he’s donating all of his winnings to his alma mater, St. Francis, as a gesture of gratitude for his start in life. He said he hopes the money helps the school fund their scholarship program, raise teacher salaries, and enhance the infrastructure.

What a way to give back to your Catholic school!