The inspiring stories of 4 new saints 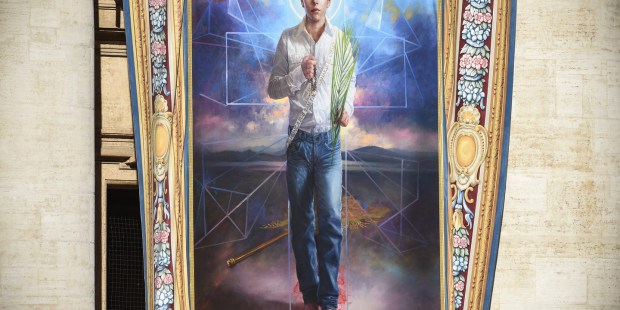 Meet the saints Pope Francis canonized on Sunday, including a 15-year-old boy martyred for his faith in Jesus Christ

VATICAN CITY — On Sunday, Pope Francis canonized seven new saints amid waves of applause from nearly 80,000 pilgrims from all over the world, gathered in St. Peter’s Square.

Addressing the faithful during his homily at the Mass of canonization, Pope Francis said:  “The saints are men and women who enter fully into the mystery of prayer.  Men and women who struggle with prayer, letting the Holy Spirit pray and struggle in them.”

“They struggle to the very end, with all their strength, and they triumph, but not by their own efforts: the Lord triumphs in them and with them.” He added: “The seven witnesses who were canonized today also fought the good fight of faith and love by their prayers. That is why they remained firm in faith, with a generous and steadfast heart.  Through their example and their intercession, may God also enable us to be men and women of prayer.”

Here are the inspiring stories of 4 of the new saints canonized on Sunday.

And read the Pope’s homily on the prayer of the saints here.

Elisabeth Catez (1880-1906) was born on July 18, 1880 in the military base at Avord, near Bourges in France, and was baptized four days later. In 1887, a short time after the family moved to Dijon, her father died. On April 19, 1891, she received her first Holy Communion: that day Elisabeth began a difficult struggle to “overcome herself for love,” learning to control her willful, fiery and impetuous temperament.

Increasingly drawn to Christ, Elisabeth made a private vow of virginity in 1894. Believing that she was called to religious life, she asked her mother for permission to enter the Carmel of Dijon. Obedient to her mother, who had prohibited her from visiting the monastery, Elisabeth did not enter until August 2, 1901. A capable and prize-winning pianist, and joyful and active in the parish and social life of her city, she passed the time before her entrance into the monastery learning how to discover Christ in all things, giving her heart to him alone, even though she was busy with many activities, participating in dances and spending time with friends.

On December 8, 1901 she was clothed with the religious habit and given the name Elizabeth of the Trinity. In the monastery she grew in her union with the Most Holy Trinity in the depths of her soul. Gazing upon the Blessed Mother, she learned to safeguard ever more the presence of the living God and each day to do the Lord’s will with generosity, as she contemplated the “excessively great love” manifested in Jesus Crucified. A short time after her religious profession on January 11, 1903, Sister Elizabeth displayed the first symptoms of Addison’s Disease, which led to her death following extreme suffering. She accepted everything peacefully and abandoned herself with confidence to the mercy of God, seeing in her illness a propitious occasion to conform herself to her Crucified Spouse, as she ardently desired to pass over into the Trinitarian joy of the communion of saints. Sister Elizabeth of the Trinity died on November 9, 1906 at the age of 26.

Read more: If you haven’t met Elizabeth of the Trinity yet, here’s why you should

A YOUTH MARTYRED FOR LOVE OF JESUS CHRIST

José Sánchez del Río (1913-1928) was born on March 28, 1913 in Sahuayo, in the State of Michoacán, Mexico. At the outbreak of the so-called “Cristero War” in 1926, his brothers joined the rebel forces fighting the violent anti-Christian regime which had been established in the country. José too was enlisted.

Catholicism flourished in Sahuayo and for this reason the “Cristeros” were deeply rooted in the area. Priests secretly remained in Sahuayo throughout the persecution and never abandoned the faithful, clandestinely celebrating the Eucharist and administrating the sacraments, at which young José assiduously participated. In those years, the first Christian martyrs were often spoken of and many young people wanted to follow in their footsteps.

During a violent battle on January 25 1928, José was captured and brought to his city of birth, where he was imprisoned in the parish church which had already been desecrated and laid waste by federalists. It was suggested that he flee in order to avoid being sentenced to death, but he refused.

While in prison, in an effort to make José renounce his faith to save himself, he was tortured and forced to watch the hanging of another boy who had been imprisoned with him. The soles of his feet flayed, José was made to walk to the cemetery where, positioned in front of the grave prepared for him, he was shot, but not mortally, and asked again to renounce the faith. But José, with every wound inflicted, cried out: “Long live Christ the King! Long live our Lady of Guadalupe!” In the end he was shot and executed. It was February 10, 1928, and he was nearly fifteen years old. Three days before he had written to his mother: “Trust in God’s will. I die happy because I am dying next to our Lord.”

In 2005, Pope Benedict XVI enrolled José among the blessed.

Read more: José Sánchez del Río: Some things are worth fighting for