The reason people were afraid of cats during the Middle Ages 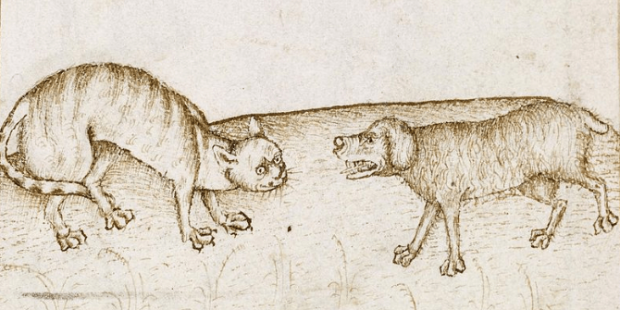 Felines, despite having a good amount of domestic responsibilities, have not always been well regarded

Almost everyone likes cats. The videos of kittens on the internet are perhaps the most popular (how could we forget “grumpy cat”?), and the number of cats featured in the comics (from Felix to Garfield) seem to indicate that, indeed, cats enjoy a pretty fair amount of popularity.

That has always been the case, even in the Middle Ages. Back in those days, it was quite common to find a cat almost anywhere, and monasteries and convents were always welcoming kitties because they helped keep out rodents and other pests that would not only bring diseases but could also steal bread and spoil the crops.

But this rodent-hunting activity, which is beneficial in every way, can also be interpreted metaphorically. In some medieval texts it is said that the devil plays with the sinner “like a cat plays with a mouse before killing it,” for example.

Thus, the image of the cat as a cruel animal, enjoying the pain of others, helped create some metaphorical association of cute little useful kitties with the devil, and the legend that claims the devil would appear as a black cat in satanic rites became popular to the point that Albigensians and other heretics were accused of worshiping cats. In fact, in the trial against the Templars, they were accused, among many other things, of allowing cats in their liturgical services, as we read in this great post published by Medievalists.net on the matter.

The medievalist Irina Metzler (the post of Medievalists.net goes on), who is the author of “Heretical Cats: animal symbolism in religious discourse,” says that perhaps the independent nature of the cat also helped create such a bad reputation. The book of Genesis suggests that animals were created to serve and help mankind, but the cat, no matter how hard you try, will never be as obedient as a dog, a horse or a cow. Metzer writes:

“Medieval people may have wanted to restrict cats to the function of animated mousetraps, for the very reason that the cat “stands at the threshold between the familiar and the wild.” “Cats were intruders into human society. They could not be owned. They entered the house by stealth, like mice, and were suffered because they kept the insufferable mice in check.” This causes a kind of conceptual tension. While the cat possesses the characteristics of a good hunter it is useful, “but as long as it does it remains incompletely domesticated.” Heretics, too, in a transferred sense, are not completely domesticated, since by challenging orthodox thought and roaming freely hither and thither in their interpretation of religious beliefs they resemble the bestiary definition of wildness. As symbolic animals, them cats may be the heretical animal par excellence”