The reality of Christian Genocide in the Middle East 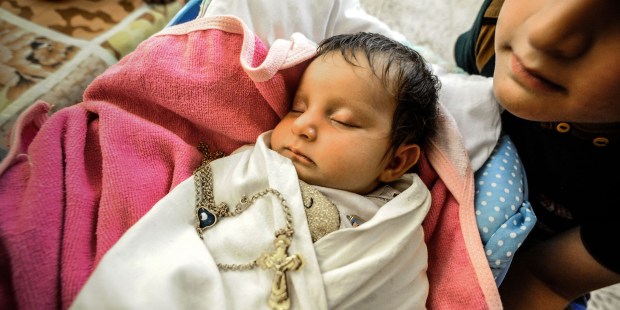 Gail Orenstein / NurPhoto
A 9 day old Assyrian baby sleeps inside a church in Erbil,Iraq, on August 11, 2014. The Assyrian Church is providing food, shelter and clean water. The families have been fleeing the Islamic State formerly knows as ISIS. (Photo by Gail Orenstein/NurPhoto)
Share
Print
Caitlin Bootsma - published on 10/19/16

Even though we hear little about this crisis, it is happening, and we can have an impact on the genocide of our Christian brothers and sisters.

How many of us grew up believing that the Holocaust would never happen again? After listening to our parents or grandparents recount war stories, empathizing with stories such as that of Anne Frank’s, and learning of the horrific ways Jews and other minorities were degraded, tortured and killed, we thought we could safely say that we had learned our lesson. Of course, that is not the case. There have been a number of genocides since the 1940s; in fact, one is happening right now.

I’m speaking of the elimination of Christians in the Middle East. Consider that in 2003, Christians were one of the largest minorities in Iraq, equaling 1.5 million. By 2014, that number had diminished to about half a million, due to the many who had fled from violence or been forced out. Since ISIS has targeted them however, only 200,000 Christians remain in Iraq, one of the oldest Christian communities in the world (In Defense of Christians 2016 Briefing Book). That’s about 87% gone in a mere 13 years.

And as you may know, it’s not just Iraqi Christians who are suffering persecution. In Iran, over 550 Christians have been arrested and detained arbitrarily since 2010 (U.S. Commission on International Religious Freedom 2016 Annual Report). In Syria, churches are being closed or destroyed by ISIS, Christians are being attacked and kidnapped—including two orthodox archbishops. Even in Turkey, Christians continue to struggle against inequality.

Why throw out all of these statistics and examples? Because without hard facts, we might be tempted to block these horrors from our mind. Secondly, because these men and women are our brothers and sisters in Christ, suffering for the faith that we proclaim together. Did you know that when St. Paul first came to Syria, he was welcomed into the Christian community there? That means that Christianity had already taken root in the area before his arrival. Christianity has deep roots in the Middle East. For many of us, our associations with the Middle East are of war, constant conflict, cities torn apart by bombs. But the Middle East is also home to a rich history of Christianity, of beautiful churches, and of a long-standing faith that has undergone many trials.

Several months ago, what Pope Francis is now calling the “martyrdom” of Fr. Jacques Hamel shook the hearts of many. Perhaps because he was a priest going about his daily business of saying the Mass, perhaps even more so because he was in France, a Western country not so different than our own. But Fr. Jacques is not alone. ISIS currently has a Christian sex trade menu, wherein Christian women as young as 9 years old are farmed out against their will for prostitution—and this is just one example of the horrific abuses being perpetrated against people because of their religion.

I had the privilege of recently attending a Summit hosted by In Defense of Christians, an American advocacy group, which brought together legislators and other interested parties to discuss this international crisis.

In Defense of Christians Director of Government Relations and Outreach Kristina Olney explained that this was an opportunity to mobilize members of the Middle Eastern diaspora community and activists who care about the unfolding tragedy for minority communities in the Middle East. We engaged with over 50 Members of Congress and over 250 Congressional offices and introduced four critical pieces of legislation to protect and preserve Christianity in Lebanon, Egypt, and Iraq. The U.S. government declared that ISIS was committing genocide against Christians in Iraq earlier this year because hundreds of thousands of Americans raised their voices as part of IDC’s Stop the Christian Genocide Campaign.

It is important to know that even though we hear little about this crisis, it is happening, and we can have an impact on the genocide of our Christian brothers and sisters. In the words of Olney, “We are asking Americans to bring the next wave of advocacy and awareness to the halls of Congress, to the executive branch, and to decision makers around the world.”

Perhaps now, more than ever because of the internet and social media, we have the opportunity to refuse to be silent about this holocaust. We can raise our voices—in prayer, to our legislators, and to our friends and neighbors. Just because the genocide of Christians is not front page news, does not mean it isn’t happening.

Find out more about the genocide of Christians in the Middle East and advocacy efforts at indefenseofchristians.org.