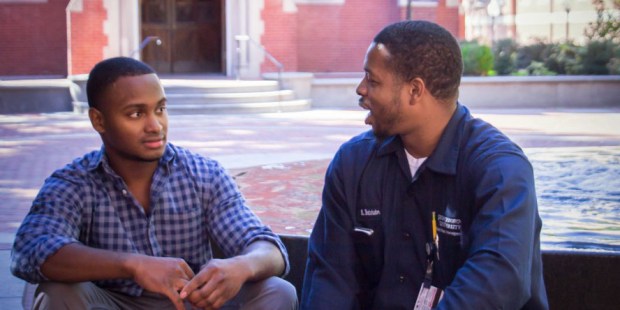 If you’re fed up with social media these days, here’s a reminder of how it can be used for good, and a story about bridging one of society’s great divides.

It began when a Georgetown University business student named Febin Bellamy and a janitor named Oneil Batchelor struck up a conversation in a quiet study hall one evening. They two learned they had a lot in common: both were immigrants — Bellamy from India and Batchelor from Jamiaca — and both wanted to be entrepreneurs.

As their friendship grew, Bellamy could no longer see workers on campus the same way — the minimum-wage earners who were dishing up cafeteria food, cleaning the dirtiest toilets, and working on the grounds. He realized they were just like his own people— like his parents who came to this country when he was 5 and worked low-wage jobs during the day, putting themselves through college at night.

Bellamy was inspired with an idea.

The 22-year-old took to social media — the language of his peers — and launched a page called Unsung Heroes, where he began profiling campus workers and introducing them to the students. At first just a class project, it became a fundraiser. Students learned all kinds of things about those who serve them everyday and have gone on to raise money for many of them. For example, a food service worker from South Sudan, who hasn’t been back to see his family for 45 years, was recently presented with a check for enough funds to return home for a visit. He is now planning his trip.

Batchelor, the janitor who helped inspire Bellamy’s idea and who was profiled in The Washington Post, has also been a grateful participant in the Unsung Heroes project. Students raised $2,500 to help him get his catering business up and running — a long-time dream of his — and also helped him get his web page up and running for Oneil’s Famous Jerk. (It probably didn’t hurt that they love to eat his food — he’s apparently a fabulous cook.) Batchelor told The Washington Post:

“It’s like the door has cracked open in front of me,” he said. “And I can smell the air coming through. The inspiration.”

Bellamy, who now calls himself a social entrepreneur, wants to expand Unsung Heroes to other campuses around the country.