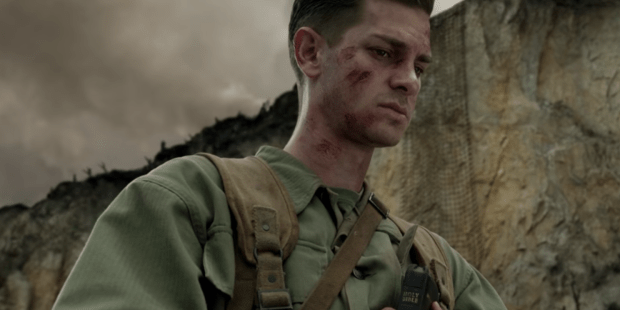 The religion of the film’s main character is often on display, but always in service to a story that appeals to all audiences

There is more human carnage in the first five minutes of Hacksaw Ridge than in the entirety of most any other movie you will see this year. The film’s opening sequence is a bloody ballet of bullets and flame, all played out in slow motion so that not a single spurt of blood or fleck of charred flesh is passed over by the camera. Yes, ladies and gentlemen, it is safe to say that Mel Gibson has in no way mellowed during his 10-year-long self-inflicted sabbatical from the director’s chair. And apparently, if the standing ovation given by the hundreds of evangelicals in attendance at the special screening I was at are any indication, there are a lot of Christians out there who will be glad he didn’t.

Hacksaw Ridge tells the true story of Desmond Doss, the first conscientious objector in American history to be awarded the Medal of Honor. Due to a combination of traumatic childhood experiences and his deeply held beliefs as a Seventh Day Adventist, Doss adamantly refused to handle any type of firearm, much less take a human life. And yet, when the Japanese attacked Pearl Harbor, the young man’s patriotism and sense of duty compelled him to enlist in the military anyway and serve his country as an Army medic.

He did so admirably, particularly during the Battle of Okinawa in which his unit was assigned the task of capturing the 400-foot-high escarpment known as Hacksaw Ridge. After heavy fire from the Japanese forces drove the rest of the 1st Battalion into retreat over the cliff’s side, Doss remained behind and single-handedly carried 75 injured soldiers to the edge of the precipice and lowered them by rope to safety, all while being hunted by enemy soldiers. This task completed, he soon rejoined his unit for a second assault on the ridge. These facts alone would be enough to make for an interesting watch, and in fact they already did way back in the award-winning 2004 documentary, The Conscientious Objector. But Hacksaw Ridge hopes to entertain as well as inform, and like its protagonist, it succeeds quite admirably.

Following the blood-soaked opening vignette in Okinawa, the movie travels back in time to Lynchburg, Virginia, where we see Desmond at various ages. There are scenes of him and his brother playing games and dealing with their emotionally abusive father, a World War I veteran suffering from post-traumatic stress disorder. Later we’re there when the teenaged Doss has a meet-cute with the girl of his dreams and, of course, immediately declares his intentions to marry her. In truth, the whole first act of the film treads fairly standard war movie territory. It’s not boring, but it’s nothing special either.

It’s when Desmond makes his seemingly contradictory decision to enlist and enters basic training that the film really gains its footing. With the war effort on uncertain ground, Desmond’s superiors feel they have neither the time nor resources to waste on a soldier who won’t fight. So when their heartfelt arguments fail to move the lad, they resort to more forceful means in hopes of persuading Desmond to either pick up a weapon or drop out.

It’s here that the film could easily slip into portraying Desmond’s persecutors as nothing more than one-dimensional villains, but wisely it never does. In fact, many of Desmond’s detractors are shown to be Christians themselves who make the perfectly valid and Church-approved argument that “it sometimes becomes necessary to use force to obtain the end of justice.” Doss himself never disputes this. At all times, Desmond’s struggle is depicted as an effort to maintain his own personal convictions, and never as a condemnation of those who choose to take up arms in legitimate defense of their country.

Just as wisely, Hacksaw Ridge never forgets to be entertaining. While never once shying away from Mel Gibson’s trademark gore (the opening scene is just a preview of the film’s climatic battle), the movie is just as adept at drawing out laughs, particularly from one recruit’s penchant for exercising in the buff. In this, Hacksaw Ridge should stand as a template for all makers of faith-based films. The religion of its main character is often on display, but always in service to a story that appeals to all audiences, religious or otherwise. Yes, there is plenty of reason for Christians to stand and cheer Desmond as he defends his religious rights, but Gibson and his crew go out of their way to make sure everyone else can do so as well. Welcome back, Mel. We missed you, blood and all.