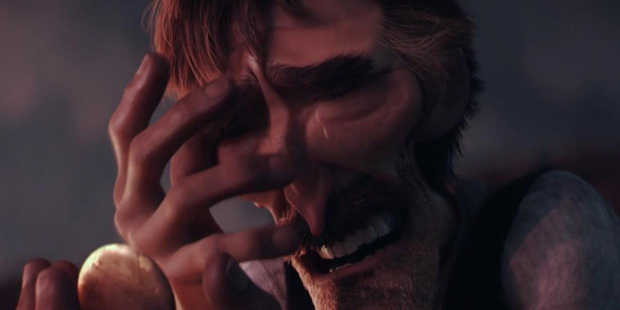 Pixar animators Andrew Coats and Lou Hamou-Lhadj took a break from their Disney friendly feature-length films to challenge the common viewpoint that animation is a genre reserved for children. For the past five years Coats and Hamou-Lhadj have been working on a short film that dives into themes that go right to the core of the human experience.

The result, Borrowed Time, is a reflection on grief, guilt and the struggles many of us have with mistakes we committed in the past. It is a stunning animated film that is certainly not for the eyes of younger children.

The synopsis reads, “A weathered Sheriff returns to the remains of an accident he has spent a lifetime trying to forget. With each step forward, the memories come flooding back. Faced with his mistake once again, he must find the strength to carry on.”

What happens in seven minutes is truly heartbreaking, but speaks to the experience of so many of us who struggle with moving on from the past. Coats told The Hollywood Reporter earlier this year, “We started with a story about forgiveness, but we changed it to a story about finding closure with something you did in your past that you might regret… Finding a way to move on with the life — ultimately it’s about self forgiveness.”

Coincidentally, this theme of forgiveness is a central aspect of this year’s Jubilee Year of Mercy, where Pope Francis has tried to remind us of the importance of forgiveness and how forgiveness can enable us to move forward from our past sins.

Pope Francis said last year in a Wednesday audience, “[God] tells us with his love that precisely when we recognize our sins he is even closer and he spurs us to look forward. He says even more: that when we recognize our sins and we ask for forgiveness, there is a celebration in Heaven. Jesus celebrates: this is his mercy: let us not be discouraged. Onward, forward with this!”

In reflecting on the choice of focusing on a western-style Sheriff, Coats said in a featurette about the film, “We wanted to take the stereotype, the strong, physical cowboy that doesn’t wear their emotions on their sleeve and see what it would look like to take that to a place that’s deeper and more emotional to him… And see what that looks like in the western iconography.”

The main hope of their experiment was to show “something that was a little bit more adult in the thematic choices, and show that animation could be a medium to tell any sort of story.”

While the two animators would love to return to directing again, they will continue with their “day job” in the mean time and work on Pixar’s upcoming sequels, including The Incredibles 2 and Cars 3.