Click here to launch the slideshow
Music transports emotions, and so you have a kind of responsibility as a musician. Where are you taking them? What are you giving them?” —Johannes Krysl

Cecilia recently had the chance to chat with Johannes Krysl and Emanuel Gollegger of Cardiac Move after their performance at the Halleluya Festival in Krakow. The band, which might best be described as the Austrian U2, has now played at five World Youth Days. Outside these Catholic events, the band received the 2009 Newcomer Award in Austria and has played alongside the likes of Switchfoot, Kid Rock, and Snow Patrol.

This odd combination of shows – playing for both pilgrims at World Youth Day and moshers at Kid Rock concerts – is emblematic of the band’s mission, which they shared with us:

You have spoken to us about how music is such a powerful tool in reaching young people. How do you strive to do that as a group?

(Johannes) Music transports emotions, and so you have a kind of responsibility as a musician. Where are you taking them? What are you giving them? We don’t stand up there and tell people you have to do this or that. It’s more about asking questions. Asking, Why are we here? What is your purpose in life? Where did we come from?

In art you have the good, the true, and the beautiful; you can display Jesus through that. We wanted to do music to make people think, to reach people. We like U2 because they are between the lines – we don’t do praise and worship, but we want to make people ask questions. And being a group that has stayed together for so long, when people ask us about that we can share our faith.

Has this always been a part of the mission of the band – spreading the faith through music – or is that something that evolved over time?

(Emanuel) This was one of our main ideas in making music. The drummer and I played in a band for awhile. We would drink too much and go on stage and play hardcore music. Then we went to Medjugorje and had a profound experience there. When we came back we knew we had to do something different. So we got together with Johannes and the rest was history.

You started off your set today with the words of John Paul II. What does it mean to be here in Krakow, and what does he mean to your band?

(Johannes) Holy John Paul II has been my pope from the beginning. I was born in 1981, so I grew up with him. And my parents told me that they went to Rome because they weren’t able to have kids. They prayed and prayed and then went to Rome where John Paul II was…and then here I am. He’s really a great companion of the band. He’s a great intercessor and a great inspiration for us.

You can pick up Cardiac Move’s latest album The Larchmont Sessions on iTunes. 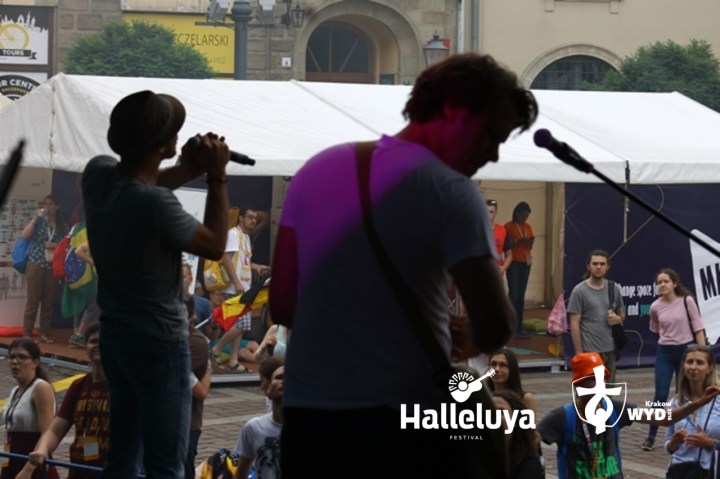