Meeting God when I least expected to 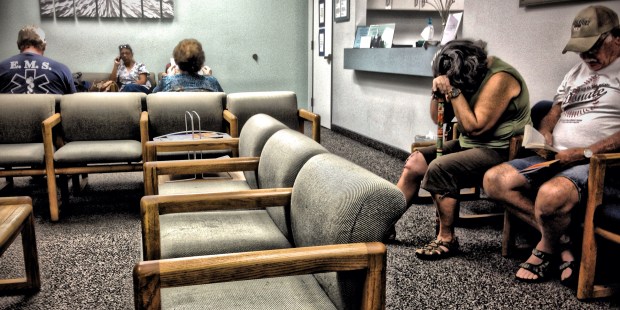 I was trying my best to avoid people, but then I got my wake-up call

I sat at the doctor’s office in the large waiting room, repeatedly tapping my foot and letting out long sighs of annoyance. I’d arrived before anyone else, but I was still waiting well over an hour past my appointment. A few days before, I’d had a CT scan of my abdominal area to see if I still had a kidney stone, and I was eager to talk to my doctor about the results.

I was still waiting impatiently some minutes later, when an attractive middle-aged woman walked in, accompanied by someone who appeared to be her daughter. But the daughter did not look normal. She was very thin — anorexic thin. Wisps of short hair framed facial features that seemed shrunken. A large red mark smeared the side of her cheek. She was a walking skeleton.

I immediately labeled the girl as a victim of an eating disorder and began to wonder why or how her mom seemed so upbeat and joyful. Could this really be her daughter, I wondered, as my thoughts flitted to speculating on how the woman might handle those who’d gawk at this poor youth wasting away beside her, and if she had grown accustomed to deflecting attention with made-up comments like, “She eats all the time, but just doesn’t gain weight.”

The two of them settled into a spot in the waiting room.

As the delay of my own appointment continued, I overheard the woman remark that she’d given a kidney to this girl.

My heart leapt. I looked over at this sunny, happy woman and blurted out, “Are you her mother?”

She said proudly and joyfully, “Yes, I am.”

My eyes filled with tears. My thoughts had been totally wrong. One moment I was judging these two women, and the next I was grateful just to be in their presence. I am not sure what brought on my tears — the fact that my dad died a few months ago from kidney cancer or the feeling that I was sitting in a room with the real life Shelby and M’Lynn of Steel Magnolias.

The mother went on to tell me of everything her daughter has been through: an aneurysm, two strokes — and she only had one kidney to begin with. She has had trouble eating with all these medical issues and fluid had built up in her lungs. The fragile girl showed me her scars. She was not shy at all about her looks.

Suddenly I realized that both of these women were radiant. It was obvious that they knew their purpose in this life, and that they were daughters of the highest King!

I believe God sends certain people to cross our paths for a reason. I had been all but losing faith in humanity. After three years of fostering children and seeing the damage done to them, I’d formed a habit of viewing people very poorly.

Every time I’d see a headline on the news or social media about a child beaten to death, or someone shot or stabbed for no reason, I’d cringe at the thought of going out into the world and interacting with others. So I was trying my best to avoid people. It seemed everything I read or watched only added to my distorted view of our society.

That day in the waiting room was my wake-up call. I am ashamed of my dismissive judgements about this girl. God wanted to remind me that there are still good people in the world. People who have lived their lives in and out of hospitals but still have the energy to proudly show you their battle wounds. This mother and daughter made an impact on me in a random waiting room, which just goes to show that God can show up anywhere. He sends so many blessings, we just have to open our eyes to notice. Psalms 27:8 tells us that our own hearts are inviting us to seek God: “‘Come,’ says my heart, ‘seek God’s face’; your face, Lord do I seek!”

I don’t need to be scared of the world. I have to silence and surrender my annoyance at the small crosses of each day — waits at the doctor’s office, or a kidney stone that isn’t even life threatening — and seek God’s face in every situation of my life, finding compassion for those around me.