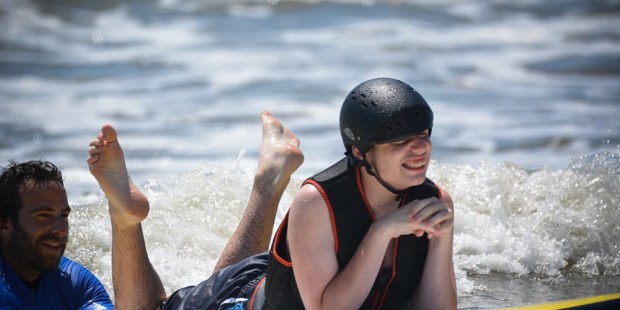 A former altar boy, Tommy Brull is remembered for his concern for others

Some people take pain and grief and transform it into love. We hear of these people, but perhaps we haven’t met many.

This past summer, I met a few. They’ve been teaching my son Jimmy, who’s 17 and on the autism spectrum, to surf.

Keith Lucchesi grew up on Long Island where he surfed every summer with his best friend Tommy Brull. Together with Tommy’s brother Marty and sister Lauren, they attended Catholic grammar school and high school. The four volunteered at Camp Anchor, a beach camp for people with various special needs.  For several summers as teens and college kids, they helped out as “buddies,” shadowing the developmentally or physically challenged kids and adults through six weeks of day camp, assisting with arts and crafts, pool time, music, lunch, beach time, and modified sports all under big tents along the shore.

Keith and Tommy remained best friends through young adulthood until tragically, Tommy died in an accident on Christmas Eve, 1999.

Years of paralyzing grief ensued both for the Brull family and for Keith.

“We’re all Catholic, and that background was a big part of us getting through this unbelievable nightmare,” explained Keith, now a Catholic school teacher.  “Tommy was a spiritual guy.  He chose Teresa as his Confirmation name for Mother Teresa … and he said someday she’s going to be a saint.  For 8th grade graduation, his parents said he could have a party, but Tommy said ‘only if I can invite every kid in the grade.’ That was like 100 kids!  But he didn’t want anyone excluded … that’s the way he was. Growing up we heard over and over the parables of Jesus, caring for the leper, for the sick and poor. Tommy was just that way, always concerned about others. We wanted to honor that.”

Their Catholic formation had deeply marked their lives, Tommy’s brother, Marty, explained. ”We grew up hearing the stories of Jesus. We were altar boys. My parents have always gone to daily Mass. Jesus is of course the model of service to others. Service was just ingrained in us; it was all around us … my mother especially has always been a very giving person.”

As the 10-year anniversary of the loss of Tommy approached, Keith, Marty and Lauren decided it was time to do something. They wanted to combine Tommy’s love for people with physical, mental or emotional challenges with his love of surfing.

Thus was born the Tommy Brull Foundation to benefit the special needs community on Long Island.

“We wanted Tommy’s name to be associated with great things, because he was a great guy, and we want him to be remembered for more than just his tragic death,” Keith explained. “He loved the special needs community, he loved surfing, and he was a really great, giving person. So this is all about him.”

The Tommy Brull Foundation organizes fundraising efforts throughout the year, including an art auction and concerts.

Each fundraiser benefits three causes. “Each time, Camp Anchor is one of the [beneficiaries] because we grew up working there and it’s kind of like our home,” Marty shared.

A surfing program was instituted at the beach camp, and all campers, from age 5 through adulthood, are offered the opportunity to learn to surf.

“Some of them are nervous at first,” Marty said. “Some just want to sit on the board, and that’s fine. Others are immediately fearless and want to get up on the board. You see how much fun it is for them. Even the ones that are non-verbal, you know immediately they love it from the look on their faces. They want to go out again and again.”

Keith still spends his summers at Camp Anchor, now overseeing the new surfing program. “A lot of people who have autism or other special needs find the water really calming,” he explained, “and the joy on their face when they’re learning to surf is just fantastic.”

The foundation is represented by the image of a ladybug, which has its own interesting history: As a young adult Tommy had joked about getting a tattoo, one that would be big and mean looking. One day at camp he showed off his new tiny ladybug tattoo, and everyone laughed and teased him.

So for Tommy’s friends and family, the ladybug has become a reminder of him.

“One winter a couple years ago, I was surfing and as I took off my wet suit, there was a ladybug on my arm,” Marty remembered. “We don’t see ladybugs around here very often even in the summer, and never in the winter, and here it was under my wet suit.

“Another time my daughter was putting her ladybug necklace in her jewelry box, and there was a real ladybug sitting on top. And the day of my daughter’s First Communion party, I glanced down and there on her head, indoors, was a ladybug. We like to think this is Tommy smiling down on us.”