Want to get away? How about your own “cell” in this “Hotel for the Soul”? 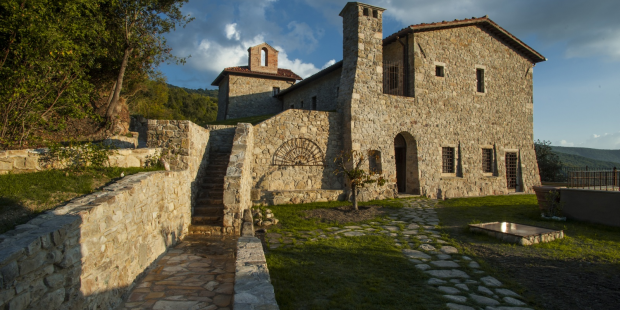 A luxury hotel in Italy that promises monastic silence

“God’s first language is silence,” says Cardinal Sarah in his new book  La Force du silence (The Strength of Silence: Against the Dictatorship of Noise). “In my new book,” the Cardinal explained in a recent interview, “I wanted to invite Christians and people of good will to enter into silence; without it, we are in illusion. The only reality that deserves our attention is God Himself, and God is silent. He waits for our silence to reveal Himself.”

One hotelier has taken the notion of silence to heart, tapping into that deep hunger created by our chaotic world.

Marcello Murzilli has opened a new high-end hotel near Orvieto, Italy, that turns the idea of luxury on its head. Called Eremito, the hotel emphasizes silence in a monastic sort of way – no wifi, no phones, no TVs, no minibars. Guests are invited to pray the Liturgy of the Office, listen to Gregorian chant, or take long walks in the property’s 7500 acres of natural reserved. The rooms are even referred to as “cells” (celluzze) for just one person, so couples reserve two. The room rates aren’t monastic, of course; Eremito’s guests pay a premium for peace.

Murzilli is no stranger to innovation. After making his fortune by selling El Charro jeans, he spent two years on a boat trying to figure out what his next move would be. He discovered a stunning spot in Mexico where he went on to build the off-the grid hotel, or eco-resort, Hotelita Desconocido (The Unknown Hotel). It was on the cutting edge of a new type of luxury resort some have called “glamping” (glam camping) because of the lack of amenities such as electricity, but made up for by 5-star dining using local organic produce. Murzilli went to great lengths to protect the natural environment, even placing the nearest refrigerator two and half miles from the hotel.

Eventually, Murzilli sold the Mexican hotel with a star-studded guest list and moved back to Italy to be near family, where he embarked on a new project: Eremito: Hotelito de l’Alma, roughly translated as Hermitage: Hotel for the Soul. “The first time I laid eyes on the location in Umbria,” Murzilli says, “I felt it was a truly unique place: the colors, the light, the sparkling river and the hills totally covered with trees.”

Guests can enjoy the rolling hills, an indoor heated pool dug from natural rock, a steam room made of stone, and outdoor gardens. The sheets, duvet covers and pillowcases are all hand-embroidered. Meals are all vegetarian from produce grown on the property or nearby organic farms. Meals are served in silence. The hotel boasts of innovative technology to create electricity during the day, but after dusk, the hotel is lit mostly by candlelight.

So what kind of travelers do they host? The hotel says it draws “solo travelers” looking for a “digital detox” and hoping to reconnect with themselves, with God, and the rhythms of nature and its elements; day and night, air, water, earth, fire. They are looking “for a place to find peace and harmony and silence.”

The concept for the hotel, Murzilli explains, started with his childhood. “I come from a large family of six brothers and sisters and although we often had difficult times we managed and were quite happy. This is why, even though life has been more than generous with me, I often feel the necessity for simple and essential things like those of my early childhood.”

Murzilli says he hopes the hotel will offer to people the opportunity to find a new way (which in reality is the oldest), to regenerate and “reconnect with things that in today’s chaotic life-style have disappeared, some almost lost.”

At Eremito, he says, “just like with Hotelito in Mexico, I decided to offer the same ‘luxury’ from long ago, from days gone by when the nights were lit by candles and the moon.”

As for silence? Murzilli says it is only interrupted by the wind.