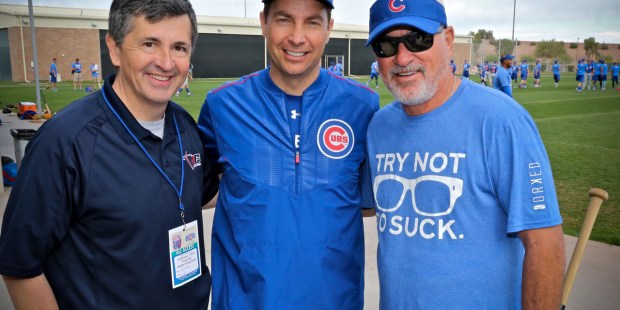 Though he doesn’t have any power to lift the “curse” to ensure the Cubs victory during the 2016 World Series, Father Burke Masters, the Catholic chaplain for the Chicago Cubs, does his part to minister to the needs of players and other staff members of the baseball organization.

Father Masters, currently the Vocation Director for the Diocese of Joliet, celebrates Mass at Wrigley Field each time the Cubs play a home game. The Mass is open to both teams and any other employees at the baseball stadium. He also offers confessions and spiritual guidance to anyone who is interested.

Recently Cubs catcher Miguel Montero took advantage of the opportunity for Mass and appreciated the Catholic chaplain’s spiritual presence. Father Masters explained to reporters, “I think it’s a great way to connect faith and sports…It was nice having one of the players here today to liven it up. Miguel was celebrating that big hit last night. He came back to give thanks. It’s a great gift.”

When asked about his attendance at Mass, Montero said, “I do enjoy going to Mass, especially when he does the Mass… As a human, you feel a lot of release after Mass. It’s such a good feeling — such a peaceful feeling. That’s why I like to do it.”

Father Masters even applied the readings to the current situation of the Chicago Cubs, “The readings today were on prayer and perseverance… I thought, what better connection is there — Cubs fans have been waiting 108 years for this, and hopefully this is the year they can celebrate and finally put that behind them and celebrate in 2016.”

For Father Masters, being the Catholic chaplain to a Major League Baseball team is a bit of a dream as he had hopes since childhood of playing professional baseball. At first those dreams appeared to be coming true as Masters, a convert to Catholicism, went on to play baseball at Mississippi State University and had great success.

During his time there Masters “was the 1989 national scholar-athlete of the year… had a .315 career batting average, hit a grand slam to beat Florida State in the 1990 NCAA regionals and played in the College World Series that year.”

Hoping to realize his dreams of playing professionally, Masters “went undrafted, told by scouts that he did everything well but nothing great [and] signed a free-agent contract with the White Sox.” It did not last long, however, and he was let go soon after.

Refusing to dismiss a career in baseball Masters “earned a master’s degree in Sports Administration from Ohio University [and] began to work for the Kane County Cougars in Geneva, Illinois, a minor league affiliate of the Florida Marlins.” It looked like he was on his way to working for a major league team.

However, God had other plans and Masters discovered that God might be calling him to the priesthood. After prayer and spiritual direction, Masters entered Mundelein Seminary and never looked back. He was ordained a priest in 2002 and appointed Vocation Director for the Diocese of Joliet in 2006.

When talking to reporters, Father Masters reflected on his journey and the road God has put him on, “I thought I was giving up baseball when I became a priest, and now to be able to be here and celebrate Mass in Wrigley is an incredible gift…[In Spring Training], I was out on the field and there were tears in my eyes. It was as if God was telling me, ‘This was your dream’ — I wanted to be a pro ballplayer — but He said, ‘You’re living my dream.’ Now, I can do both. I can be a priest and be here in the Major Leagues at the same time. I’m humbled to my toes to be able to do this and give back what God has given me.”