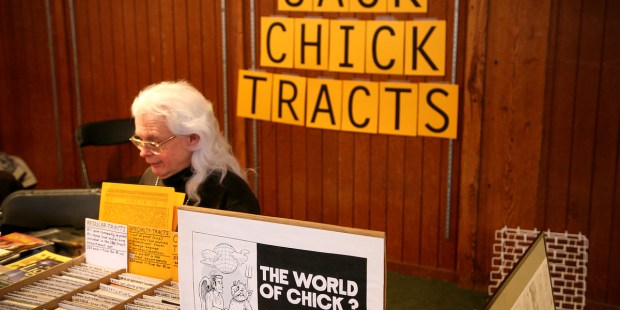 Those who grew up in the Chick tract world come into the Church. They had experienced war. They want mercy.

Giving people tracts attacking their religion is the great passive-aggressive form of evangelism. The fundamentalist anti-Catholic pamphleteer Jack Chick died Sunday at the age of 92, and judging from Facebook conversations, a lot of cradle Catholics had to put up with his tracts. He supposedly printed 500 million of them.

They’d get them from strangers and even from friends. What, you have to wonder, were these friends thinking? “Hi. I really like you and I’m glad we’re friends, but your religion is Satanic. I bet you didn’t know you’re the servant of demons! Just wanted to share!” Some found tracts stuck under their windshield wipers after Mass. Once, if I remember right a story I heard years ago from a very annoyed Catholic, someone secretly stuck Chick tracts inside the materials in his parish tract rack.

Chick seems to have started out with hard-sell evangelism and branched out to attacks on things of which he disapproved, supremely but not only the Catholic Church. In one tract he called the Eucharist “the Death Cookie,” and I stopped reading it because it is clench-up-your-whole-body-and-lean-away-from-the-computer blasphemous. Catholic Answers has an extensive expose if you want more on Mr. Chick.

But what was most revealing to me was how many former Protestants had Chick tracts in their history and how the tracts symbolized the fundamentalist world they’d left behind. Not so much the Chickian anti-Catholicism, but that harsh, dogmatic separatism, that takes the differences between people as the most important fact about them.

Theirs had been a world that set itself against whatever the average person did. It liked drawing lines and building walls. It didn’t believe in slow, gentle movement. Dramatic conversions or dramatic de-conversions, that was their idea of choosing sides. Yank a man in on a chain or shoot him out of a cannon, but don’t let him hang around the gate.

If I read them right, the converts came to the Church in part because she did not do that. Chick’s kind of evangelism begins with “You’re a sinner” and then mentions that God loves you, but more like a father bailing you out of jail than a father gathering you into his arms. Catholic life begins with the reality that God loves you as a father gathering you in his arms, and then as appropriate brings up your sinfulness.

Not always and not perfectly, of course. You can find Jack Chick Catholics, whose idea of the Church militant is Genghis Khan’s army sweeping across Asia. You can find the opposite, too: Catholics who forget how terrible (in the older sense) God’s love can be and turn “love” into “luv.” There are a lot of them.

Even so, you can see why those who grew up in the Chick tract world come into the Church. They had experienced war. They want mercy.

Chick may explain himself

When I was a child, and my family only sporadically went to church, I somehow got a Chick tract. It must have been one of the earlier, saner ones. The one panel I remember showed two angels flying a man to judgment, with the man telling them confidently that this was certainly not happening because he didn’t believe in God.

That man could be any of us at some point in our lives. Denial is not just a river, etc. I wonder if in this story Chick explained his extreme anti-Catholicism. Maybe he hated what he saw or liked it too much. But in either case he felt that what he saw could not be, and so set out to destroy it.

Chesterton deals with the same situation in his classic little book The Catholic Church and Conversion. He asked his Calvinist friends “why in the world they were so afraid of Papists; why a priest in somebody’s house was a peril or an Irish servant the beginning of a pestilence.”

The acted as if he’d said something daring, as if he had tried to “convert a burglar or tame a mad dog.” He didn’t think the burglar would convert him and that, he said,

is the subconscious intuition in the whole business. It must either mean that they suspect that our religion has something about it so wrong that the hint of it is bad for anybody; or else that it has something so right that the presence of it would convert anybody. To do them justice, I think most of them darkly suspect the second and not the first.

I’d like to think this is true of Jack Chick, that he saw the truth of the Catholic Church, and that before he died he repented of the sins he had committed against her and her Lord. Maybe he’ll get some credit for the many his bad example helped push into the Church.

For David Mills’ story of Jack Chick arriving at the Gates of Heaven, see I’m Jack Chick@ Give me some Purgatory!