For this anniversary, the Fine Arts Museum of Tours is dedicating an exhibition to him

The first saint in European history not to die a martyr, Martin of Tours has enjoyed great popular devotion since the 4th century. The Museum of Fine Arts of Tours is dedicating a beautiful exhibition to him through January 8, 2017. One hundred and twenty works, dating from the 4th to the 20th century, present a rich iconography and portray the extent of the saint’s influence throughout Europe.

The legend of St. Martin and its representation in art

As soon as the visitor enters the first room of the exhibition, he is immersed in the legend of St. Martin. He discovers the Martinelli, the works on the saint’s life inspired by the first text published on St. Martin in the 4th century by Sulpicius Severus. Born in Hungary, St. Martin grew up in Pavia with his father, an officer in the Roman army. Forcibly recruited, he served in the Imperial Guard at Amiens up until the famous episode during the winter of 337: Martin cut his cloak in two to share it with a freezing beggar at the door of the city. After this, he converted to Christianity and left the army. He founded the first monastery of the West at Ligugé in the Poitou region with Hilary, Bishop of Poitiers. St. Martin then became Bishop of Tours in 371, where he founded a hermitage, the future monastery of Marmoutier. From the 5th century on, the city of Tours became an important pilgrimage site, attracting many faithful who came to pray on the saint’s tomb.

La Vita Martini of Sulpicius Severus remained for centuries a reference for artists who drew their inspiration from it. The exhibition displays paintings, drawings, stained glass and artwork depicting episodes from St. Martin’s life. The most popular is of course the Charity of Amiens, which illustrates Martin giving away half his cloak. From the illuminated manuscripts of the Middle Ages to the 17th-century paintings, it is interesting to note the iconographic evolution of the saint: from a Roman soldier, he became a rich nobleman. 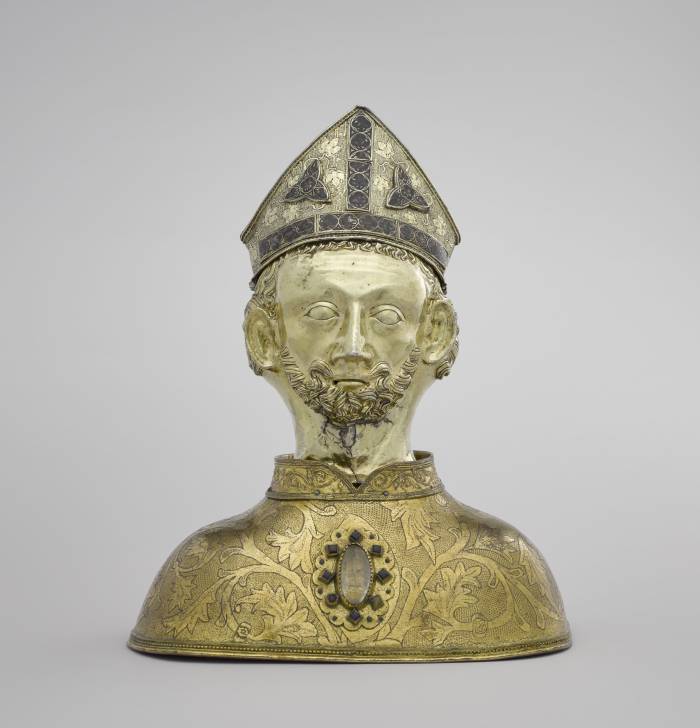 A great traveler, St. Martin played an important role in evangelization throughout the Empire. He ended his life in Touraine where “martinian” buildings were erected. The exhibit allows visitors to discover, among others, the Abbey of Marmoutier, called “the great monastery,” and the Saint-Martin collegiate of Tours. Archaeological finds from excavations — sculpted elements, fragments of the saint’s tomb, stone capitals — are on display. Manuscripts, drawings and paintings also help explain the architectural evolution of these places. In addition, a video shows the 3D reconstruction project of the St. Martin de Tours Basilica, and a cubicle musicae (“musical room”), allowing a sonic and visual immersion, is installed in the museum courtyard.

The revival of the veneration of St. Martin

The exhibition ends with the indications of the revival of the cult of the saint in the 19th century. Paintings of the saint’s life flourished, mainly for churches bearing his name. The theme of St. Martin’s unselfishness became widespread. The rediscovery of his tomb in 1860 contributed to this renewed interest and was the reason for the reconstruction of the Tours basilica by architect Laloux between 1886 and 1902. The preparatory cartoons for the stained glass windows of the new building are on exhibit, as are paintings such as Auguste Felix Bauer’s representing “The lesson of illumination” in front of a statue of St. Martin sharing his cloak. All this testifies to the “martinian” revival in the arts.

Tracing St. Martin’s footsteps from the 4th to the 19th century, this beautiful exhibition allows not only an iconographic discovery of the saint, but also shows his influence and popularity beyond France.  A “must see” for families!

Translated from the French.