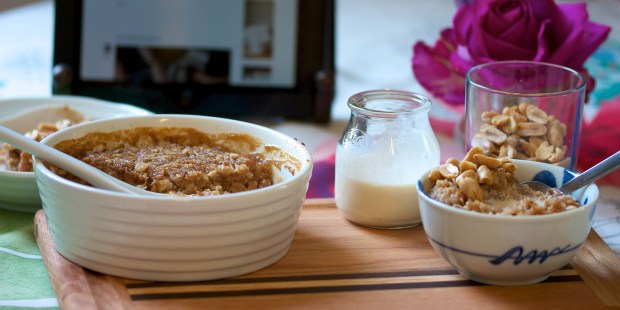 This recipe is fast, easy, adaptable and perfect comfort food as the days grow chill

Ten years or so ago, one of my sons injured himself playing football with friends, and needed an early-morning appointment with a medico. Afterwards, we stopped to eat at a little local restaurant that is known for it’s particularly good breakfast fare. I took him out to breakfast. I ordered “baked oatmeal” believing it would be a basic bowl of oats, but baked instead of boiled.

Came to the table a steaming bowl of something slightly crusty on top, moist below, served with hot whole milk on the side. It smelled heavenly, and I took a spoonful and swooned. It was oatmeal, but it had apples and cranberries and walnuts in it, and brown sugar and raisins and cinnamon. With the second bite I announced to my son, “This is like eating Christmas! It’s just unreal!”

My son helped himself to some of it…then to some more. Eventually he put away half of the scrumptious mixture, along with his eggs. I had to come home and immediately search for the recipe. After several false starts, I managed to find one that, with a little help, came very close to what we tasted that day.

If you wish, you can assemble this thing the night before and then throw it into the oven in the morning for 40 minutes, but it goes together pretty quickly, and we prefer it freshly made in these parts. It’s the perfect breakfast for a lazy weekend, and the leftovers, warmed up and topped with yogurt or vanilla ice cream, can also be pretty special.

One can make this more decorative by adding peach or apple slices to the top before baking.