Pope Francis as he heads to Sweden: “To do something together is a lofty and effective form of dialogue.” 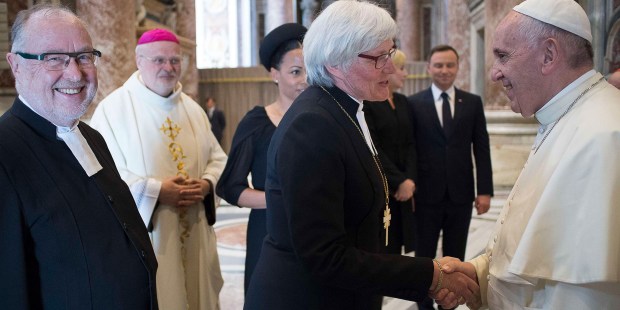 VATICAN CITY — On the eve of his upcoming apostolic visit to Sweden to participate in the ecumenical commemoration marking 500 years since the Protestant Reformation, Pope Francis has granted a new interview to the Jesuit journal, La Civiltà Cattolica.

The interview took place in the private apartments of Pope Francis in Santa Marta, on the afternoon of September 24, 2016.

Focusing primarily on ecumenism, the pope expressed his hopes for his trip to Sweden, spoke about the history of his own relations with Lutherans in Argentina, Sweden and Denmark — then as Pope through his visit to the Lutheran church in Rome — and discussed ways to move forward on the path of Christian unity.

Asked what the Catholic Church could learn from the Lutheran tradition, he said: “Two words come to my mind: ‘reform’ and ‘Scripture.’”

“I will try to explain,” he said. “The first is the word ‘reform.’ At the beginning, Luther’s was a gesture of reform in a difficult time for the Church. Luther wanted to remedy a complex situation. Then this gesture—also because of the political situations, we think also of the cuius regio eius religio (whose realm, his religion) —became a ‘state’ of separation, and not a process of reform of the whole Church, which is fundamental, because the Church is semper reformanda (always reforming).”

“The second word is ‘Scripture,’ the Word of God,” Pope Francis continued. “Luther took a great step by putting the Word of God into the hands of the people. Reform and Scripture are two things that we can deepen by looking at the Lutheran tradition. The General Congregations before the Conclave comes to mind and how the request for a reform was alive in our discussions.”

Addressing ways to overcome obstacles on the ecumenical front and to promote unity among Christians, Pope Francis said: “Personally, I believe that enthusiasm must shift towards common prayer and the works of mercy — work done together to help the sick, the poor, and the imprisoned. To do something together is a lofty and effective form of dialogue.”

Yet the pope also stirred controversy, calling proselytism “in the ecclesial field” is “sin.”

“There is a policy we should have clear in every case: to proselytize in the ecclesial field is sin. Benedict XVI told us that the Church does not grow by proselytism, but by attraction. Proselytism is a sinful attitude,” he said.

What Pope Francis may have been referring to is Benedict XVI’s address to the bishops of Latin America in 2007, when he said: “The Church does not engage in proselytism. Instead, she grows by ‘attraction’: just as Christ ‘draws all to himself’ by the power of his love, culminating in the sacrifice of the Cross, so the Church fulfils her mission to the extent that, in union with Christ, she accomplishes every one of her works in spiritual and practical imitation of the love of her Lord.”

Conducted on the same day he met with the families of victims killed in the Nice attack, Pope Francis called war carried out in the name of God “blasphemy” and “satanic.” But he also commented on what he calls the “terrorism of gossip,” calling it the “sneaky terrorism” that throws words like “bombs” and does great evil.

“The sword kills so many people, but the tongue kills more,” he said.

Asked about suffering of Christians in the Middle East and if peace is still possible for Christians there, he called the region “a land of martyrs” and said: “I believe that the Lord does not leave his people on their own. He will not abandon them. When we read of the hard trials of the people of Israel in the Bible or remember the trials of the martyrs, we see how the Lord always comes to the aid of his people.”

Pope Francis continued, saying: “In this moment the Middle East is a land of martyrs. We can without doubt speak of a Syrian martyr and martyrdom. I want to cite a personal memory that remains in my heart. At Lesbos, I met a father with two children. He told me that he was very in love with his wife. He is Muslim and she was Christian. When the terrorists came, they wanted her to take of her cross, but she did not want to do it and they slit her throat in front of her husband and children. He continued to say: ‘I love her so much. I love her so much.’ Yes, she is a martyr. But the Christian knows that there is hope. The blood of the martyrs is the seed of the Christians. We have always known it.”

Finally, the interview also touched on questions like: “Who is Jesus for Jorge Mario Bergoglio?,” with the pope revealing the chapter in Scripture that sums up his spiritual life.

Asked for a “final word” on this trip in Sweden, Pope Francis said: “What comes spontaneously for me to add now is simply: go, walk together! Don’t remain closed in rigid perspectives, because in these there is no possibility of reform.”