The totally wrong, unofficial and full of blarney truth about the origins of the Jack O’Lantern 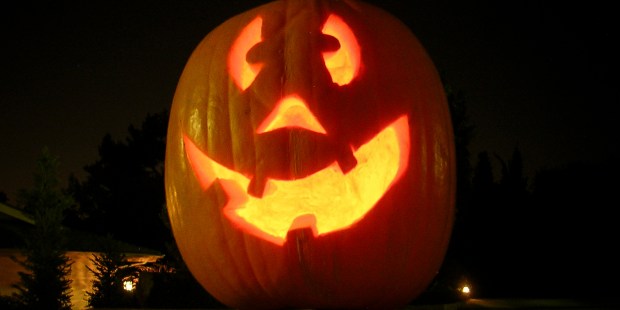 Editor’s Note: Halloween, as Aleteia noted this week, is actually a Catholic feast, the vigil of All Saints Day, which in the United States is a holy day of obligation.

Philip Kosloski notes some of the many traditions that have been interwoven to morph into today’s Halloween festivities.

Traditions often draw from a variety of sources as they develop over the years. Many times traditions are linked to stories, which vary from culture to culture and even family to family.

The family of Aleteia’s Larry Peterson enjoys the following annual telling of the history of Jack-o-Lantern, which Larry says he crafted when his own children were small, and now enjoys telling to the grandkids. He describes it as a compilation of his own creativity and other tales about Jack that he’s heard or read through the years …

Long ago in Ireland, the land of shamrocks, leprechauns, soft winds and smiles, there lived a man named Jack. Jack was quite lazy and did not like to work. But he had the gift of “blarney” and could talk the peat off the moss.

He would tell wondrous tales about his adventures as a world traveler and the people in his village would be held spellbound by his golden tongue.

Alas, one day Jack outsmarted himself.

Thinking the townsfolk were not very smart, as they allowed him to talk and never work, he decided he’d steal some money from them. They would never find out, Jack figured. But they did find out and began chasing him down the streets of the village.

As Jack ran down the road as fast as he could, he rounded a bend and ran smack into the devil. The devil smiled at Jack and told him it was time for him to die and that he was there to take his soul. Jack quickly convinced the devil that if he would let him go and promise to never take his soul he would give him all the souls of the folks who were chasing him. “And how do you plan to do that, Jack?” the devil asked.

“Well now, all ye have ta do is turn ye-self into a pot of gold coins. Then I will give the coins to the people and you will be in all of their pockets. They will be yours.”

Since many souls were better than only one, the devil readily agreed and turned himself into a pot of gold coins. Jack gave the coins to all the people and they went away smiling, never realizing that they had given themselves to the devil in return for money.

So Jack lived on, grew old and, like all mortal men, finally died. His life had been so sinful on earth that he could not get into heaven and since the devil could not take his soul, he could not get into hell. He had nowhere to go. He asked the devil how he was supposed to see because he was in complete darkness. The devil laughed and tossed Jack a burning ember from the fires of hell, an ember that would never burn out.

Jack, using the ember to guide his way, found a pumpkin patch (some say it was turnips) and carved out a pumpkin. He put the ember inside and began carrying it around so he could see where he was going. To this day he wanders the earth seeking a resting place. And that is why he is known as “Jack-O’-Lantern” or “Jack of the Lantern.”