Stumbling and bumbling through the Holy Door 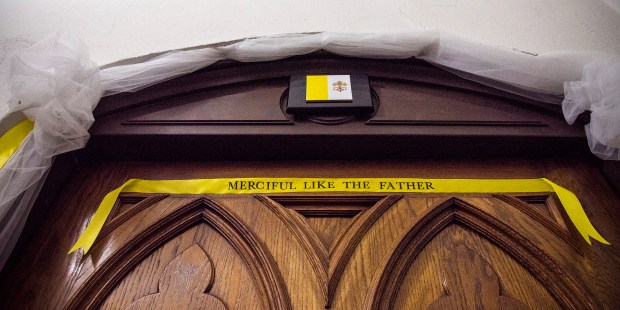 It was lost; the whole properly ordered spiritual experience that I had planned for practically a whole year. Or was it?

Being Catholic is serious business. We do not take lightly that we are carrying God within us, in our being. We try—at times, desperately—to recognize Christ in those, let’s say, irregular kinds of folks we encounter. Well, I’m one of those kinds of folks, someone who stumbles and bumbles to the frustration of those nearby.

I did it to myself, again, a couple days ago.

I had waited eleven months to go to the Holy Door at the Cathedral in my diocese. A friend of mine, with a very hectic schedule, also wanted to go after being told about the associated graces. With only a few weeks left until the doors were shut, off we went one Tuesday morning.

I’d read how to do the passage properly, and had a plan about doing all the prayers in a tidy order. I wanted to “be pleasing” to the Lord by following the protocol, showing good Catholic manners and proper behavior.

When we entered the nave of the Cathedral, I saw a cubby and the portion of a door frame to the side of the stand of red votive candles. In my excitement I left my friend in the aisle. I’m below his well-over-six-foot line of sight, so he couldn’t find me. Those in the church waiting for Mass to begin were disturbed—evident by the stares and murmurings—by our rather loud calls to locate one another.

Once reunited, I discovered we were on the wrong side of the Holy Door entry and at the table with prayer cards intended for those who’d already passed through the door properly. He, a big man, kept circling the tiny space as I was trying to get out and to the correct side of the door. He bumped into a woman trying to pass by, and I ran into a man in the process of coming through.

Surrendering to the confusion and mini crowd in the receiving area, I entered the hexagonal room next to the table set aside for the prayers prescribed for an indulgence. My friend followed me into the room, pointed out recognition of this and that picture on the wall, and completely forgot about the prayers we were supposed to be saying. I was a frustrated mess.

There, below a cross, was a kneeler facing a wall. My friend, I fear, unimpressed with the all of it all, had left the room. Hurriedly I lowered myself onto the kneeler, thumping my forehead loudly against the wall and smashing my glasses into my face.

It was lost; the whole properly ordered spiritual experience that I had planned for practically a whole year. Near tears, I remembered to pray the Creed, and in my hand was a prayer card with the Holy Father’s intentions—those seemed important to mention specifically, too.

Standing, I cleaned the smudges off my glasses where they had hit my cheeks, and exited through the Holy Door the wrong way. Despite going against traffic again, I was delighted to see on the adjoining wall a lovely hand-painted board explaining the Holy Door. Within the text was a quote from Pope St. John Paul II about God’s mercy. I took a picture of it to reread later, but forget about the flash in a darkened church. Ah well…

Being finally turned-round-right, I placed my hands upon the Holy Door, thanked God for his mercy, and passing through, tripped against the holy card table—which sent everything crashing to the floor.

Sitting in the pew next to my well-over-six-foot friend, I felt the Good Lord smiling over me, and I began to quietly laugh with Him. In my greatest desire to do things right, he was pleased beyond measure at the humor of the attempt. Laughing at myself had never been easier.

It was in my desire to please Our Lord that he was pleased, though he seemed to delight in the comic relief as well. So typical of me and how I come to faith, backwards or sideways until I find my way. I was humbled beyond measure at the thought of having given the Lord yet another reason to laugh.