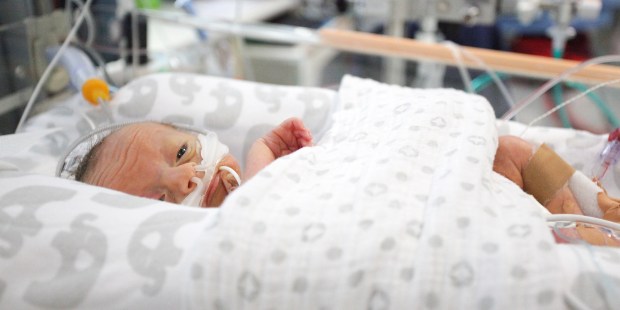 Doctors removed Lynlee from mom’s womb for delicate surgery, then put her back

Lynlee was saved from a deadly cancer when doctors removed her from her mother’s womb at 23 weeks to perform a delicate operation. They then put her back in to continue her gestation.

Margaret Boemer had already lost Lynlee’s twin at six weeks and had miscarried an earlier pregnancy.

“Soon, doctors would approach Boemer with more grim news: The child she was carrying had sacrococcygeal teratoma, a rare tumor that appeared at the base of baby’s tailbone,” the Post reported. “If left unchecked, the tumor could continue taking her baby’s blood supply and eventually cause heart failure.”

Doctors advised the Texas couple to visit specialized hospitals in Houston for additional opinions. One of those hospitals “strongly recommended” abortion. Performing open fetal surgery was too risky, doctors said.

Meanwhile, doctors at Texas Children’s Hospital examined the tumor with cautious optimism. They agreed that in utero surgery would be required, but as it happened, two doctors there, Darrell Cass and Oluyinka Olutoye, had successfully done such a procedure seven years before.

They explained to Boemer that it would indeed be extremely risky. But at 20 weeks into the pregnancy, the tumor was already almost as big as the fetus — and about four times larger than what would be considered the threshold for surgical intervention, Olutoye said.

At 23 weeks, the tumor had grown large enough that doctors sent Boemer back to Texas Children’s Hospital in Houston.

“I went down there thinking: ‘I’ll be here for checkups all week,’ ” Boemer said. Instead, doctors told her Lynlee might not survive two more days without intervention. “I went into surgery that night.”

Drs. Cass and Olutoye were assisted by a team of about 20 others for the five-hour surgery.

The majority of the time was spent making meticulous incisions into the uterus, then carefully pulling out the lower half of Lynlee’s body.

In the middle of the procedure, Lynlee’s heart stopped and needed to be restarted; she required a blood transfusion, as well. …

After removing about 90 percent of the tumor, surgeons placed Lynlee back into the womb. Closing the uterus proved tricky, as well. The doctors needed to seal the membrane to the uterus, doing it in a watertight fashion that — even after 23 weeks — would continue stretching as the pregnancy progressed. …

Boemer was ordered to stay in Houston, on bed rest, for the remainder of her pregnancy. To doctors’ relief and surprise, Lynlee continued to grow.

“Her heart got much better, now that it didn’t have to work as hard pumping through this huge tumor,” Olutoye noted.

On June 6, Lynlee was delivered by C-section. She emerged “singing,” weighing 5 pounds and 5 ounces.

“You can say she’s seen the world twice,” he added.

If she had a second birth, she also received a second name. The Boemers put a middle name on Lynlee’s birth certificate: Hope.

Lynlee has had further surgery to remove the rest of the tumor and will need to return regularly for checkups.

“We’re going to get very close,” Olutoye tells all his patients, whom he says he often knows from “before they are born … all the way up into adulthood.”