Matt Maher’s Saints & Sinners is the ultimate All Saints compilation

When you can remember how far off you were when God found you, your own conversion stands as a testimony to God and mercy, but it also gives you a way to relate to other people. — Matt Maher

The garage-turned-studio behind Matt Maher’s home became of haven of reflection, and the church’s broad array of characters would there become the fuel of that reflection: “I naturally started gravitating toward writings and quotes from people having experienced the tension between certainty and mystery,” shares Maher.

He began saving these prayers, quotes and excerpts while also studying prophetic voices who significantly impacted the history of the church – believers who wrestled with matters of faith, who challenged the status quo and left marked legacies.

And this short list of difference makers would eventually come together to form the content of his latest album Saints & Sinners.

The song “Firelight” is inspired by one of the Church’s newest saints, Mother Teresa of Calcutta. Maher was inspired by Mother Teresa’s experience of darkness and a particular quote from the Albanian nun: “If I ever do become a saint, I will surely be one of darkness. For I will not be content to roam the streets of heaven while there’s one soul who still longs for God.”

“Her quote captures that hunger of a person, who in the midst of struggle, still loves the marginalized and still loves the oppressed,” shares Maher. “The song is a cry to God, a frail prayer, asking Him to shine through our disillusionment and light the way in the darkness.”

“Instrument” finds it inspiration in St. Francis. Maher writes, “The prayer of St. Francis is a huge source of inspiration in my life. It’s such a simple and beautiful prayer. It was written in France and attributed to St. Francis because it seemed to have his character and the dynamic of his spirituality…The chorus is inspired by the song that St. Francis actually did write, which was ‘All Creatures of Our God and King,’ in which there is a recurring line that says, ‘Oh praise Him.’”

The song “Everything is Grace” comes from one of Maher’s favorite saints, the little flower, Therese of Lisieux. He recalls a quote from the spiritual giant: “‘Everything is grace. Everything is a direct result of the Father’s love for us. So no matter the difficulties you face, however trivial or serious, they’re basically all an opportunity.’ You reach a point in your journey where all of a sudden things start going wrong in life and it’s OK. Everything is grace,” explains Maher. “Everything is an opportunity. Eleven years ago, I wrote ‘Your Grace is Enough,’ and 11 years later, it’s still the case.”

After all, the album is called Saints & Sinners. Maher has found that while we all come from different backgrounds, amass a range of experiences and even harbor conflicting opinions, the one thing that always binds us together is our humanity. “It’s the sinful side of me that helps me identify with other broken people and not see myself as better. Christianity doesn’t make me better than anybody else,” he contends.

“The process of being transformed is sometimes a really mess process. When you can remember how far off you were when God found you, your own conversion stands as a testimony to God and mercy, but it also gives you a way to relate to other people.” After all, we were created by a loving God who designed us for a greater purpose. We are each on the pilgrimage of searching out that purposed, being transformed, saints and sinners. 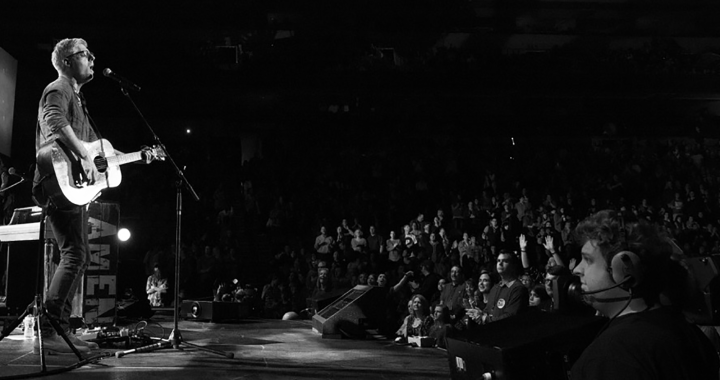