“Saints Who Battled Satan”: Hope for all souls 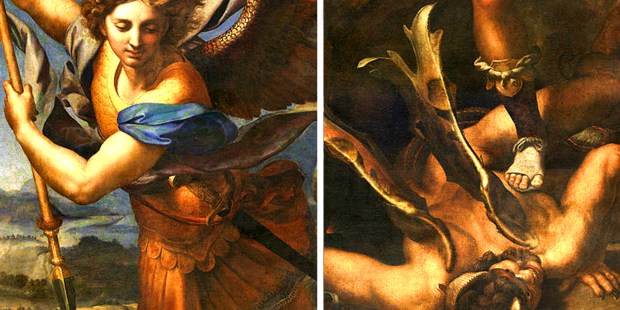 Saints Who Battled Satan is a book about reality and hope. Paul Thigpen tells the stories of intercessors wanting to help us in our battle to be holy and seek the face of God always and for eternity. We talk a bit about our souls and saints as we begin a month dedicated to all souls.

Kathryn Jean Lopez: What does it mean to say Mary was a “tower of ivory,” as you do in the chapter about her? Is there anything in our world today that can help us understand such a thing?

Paul Thigpen: It’s a traditional devotional title for the Virgin Mary. Here’s how Blessed John Henry Cardinal Newman explains it in his Meditations and Devotions: “A tower is a structure which rises higher and more conspicuous than other objects in its neighborhood. Thus, when we say a man ‘towers’ over his fellows, we mean to signify that they look small in comparison of him. This quality of greatness is displayed in the Blessed Virgin. … But towers, it may be said, are huge, rough, heavy, obtrusive, graceless structures … with nothing of the beauty, refinement, and finish which are conspicuous in Mary. … Therefore she is called the Tower of Ivory, to suggest to us, by the brightness, purity, and exquisiteness of that material, how transcendent is the loveliness and the gentleness of the Mother of God.”

Lopez: Why is it important never to speak to demons? What are the odds of the opportunity even arising, for the choice to have to be made?

Thigpen: In my experience, when I recognize that a thought has entered my head from the Enemy, or that a difficult situation seems to have been orchestrated or aggravated by him, I’ll sometimes quote Our Lord by saying, “Get behind me, Satan!” (Mt 16:23) or the words of St. Michael the Archangel when contending with the Devil: “The Lord rebuke you!” (Ju 9). I don’t think it’s wrong to do that.

What the Church warns against is trying to make the kind of pronouncements against demonic powers that are reserved to the clergy or (in some cases) to exorcists alone. The rest of us don’t have the delegated authority from Christ, through the Apostles and their successors, to perform exorcisms or to appropriate the words of the Rite of Exorcism.

To be effective, exorcisms (and even prayers drawn from the Rite) require this God-given authority on the part of the minister. Otherwise, the results can be disastrous. We can see this danger illustrated by an incident recorded in the biblical Book of Acts, when a group of men who attempted to perform an exorcism without being authorized by Jesus or one of his apostles. They ended up fleeing the scene “naked and wounded” (see Acts 19:13–16).

A second warning of the Church involves the attempt to enter into some kind of conversation with demonic spirits. Before I became Catholic, I belonged to a Christian tradition that encouraged such conversations between those who were called “deliverance ministers” and the evil spirits that presumably possessed the people they sought to help. They would ask them their names and similar questions. I’ve heard of that happening in some Catholic circles as well.

Nevertheless, a dialogue with the Devil rarely ends well. Our ancient Enemy is extremely wily and subtle, a master at persuasion. More importantly, he is “a liar and the father of lies” (Jn 8:44), as Jesus noted. He seeks to draw us in and deceive us.

How many of us will ever have the opportunity to act on this advice? In some Christian circles, there are many more involved in these situations than you might guess. But even for the rest of us, the point is well taken: The “ordinary activity” of the Devil, as Christian tradition calls it, involves every one of us through his strategy of frequent temptation, largely in our thought life.

The challenge, then, becomes identifying what kinds of thoughts are coming from the Enemy, and how to respond to them effectively without entering a conversation. Much more about that in my book Manual for Spiritual Warfare.

Lopez: What’s up with the St. Benedict medal and how is it not superstition?

Thigpen: St. Benedict (c. 480–543) was known as a skilled spiritual warrior. The medal that bears his name and his image is one of many sacramentals of the Catholic tradition. The Catechism of the Catholic Church defines sacramentals as “sacred signs which bear a resemblance to the sacraments. They signify effects, especially of a spiritual nature, which are obtained through the intercession of the Church. By them men are disposed to receive the chief effect of the sacraments, and various occasions in life are rendered holy” (CCC 1667, SC, 60).

Sacramentals include certain actions, such as the Sign of the Cross and other blessings, as well as objects that have been blessed, such as holy water, oil, salt, candles, incense, rosaries, crucifixes, medals, scapulars, and religious images. Sacramentals don’t confer the grace of the Holy Spirit in the way that sacraments do, but through the prayers of the Church associated with them, these actions and objects prepare us to receive grace and dispose us to cooperate with it.

Since ancient times, Christians have recognized the power of the Church’s intercession as it’s displayed through the use of sacramentals. Most notably, the ministry of exorcism is itself a sacramental. Exorcists speak frequently of how God’s power against Satan can enter a situation through the presence of a sacramental.

Both the blessings that are properly given by clergy (such as those in the Liturgy) and the blessings spoken by lay people as part of their daily lives (such as a table grace) are important sacramentals. They can sanctify our thoughts, our actions, and our surroundings in a way that repels the Enemy. We see their power most clearly when used to remedy the demonic infestation of a building or object through a priestly blessing with holy water.

Throughout the centuries, the testimony of many Christians, including a number of saints, confirms that objects blessed by a priest, through the power of the Church’s intercession, can repel demonic powers. Typically, demon-possessed persons display an extreme, even violent, revulsion to holy water and other sacramentals, recoiling in dread.

St. Benedict medals in particular are known as “devil-chasing medals.” They typically have on their reverse side the initial letters of the Latin words in an ancient prayer against the Evil One, which begins, Vade retro satana: “Get back, Satan!” The command is similar to Jesus’ exclamation “Get behind me, Satan!” (See Mt 16:23.) The rest of the prayer says, “Never tempt me with your vanities! What you offer me is evil. Drink the poison yourself!”

If you think that using sacramentals in spiritual warfare is superstitious, just read the testimonies of exorcists and the stories of saints such as those in this book. They witness to God’s power flowing in response to the prayers of the Church associated with the Sign of the Cross, holy water, crucifixes, and all the rest.

Keep in mind that an object is not a sacramental unless it has been blessed by a priest. Given that reality, one exorcist told me about certain strategies he takes in discerning between someone who is demon-possessed seeking help and someone with psychological problems only.

Similar stories abound. We’re not dealing here with a superstition.

Lopez: How best might your book be made use of?

Thigpen: The purpose of this book is to present the stories and insights of a number of saints who battled Satan so that we can become more familiar with our heavenly comrades and more prompt to seek their help. From among the many saints I could have included, I have chosen a few, presented in chronological order, whose experience offers a wide variety of compelling lessons in combat. I have not attempted to provide a biography of each saint, but only enough information to identify them and to tell about their struggles.

In each chapter, I have also tried to present a bit of historical context that notes the features of the broader spiritual battlefield of the Church of that time. My hope is that such context serves as a reminder that our warfare is not just a matter of personal interior struggle, and that the conduct of each spiritual soldier makes a critical difference in the outcome of the wider battle.

In many ways, the accounts in this book can be seen as historical illustrations of the spiritual realities and principles laid out in my Manual for Spiritual Warfare (TAN Books, 2014). There, I offered a brief summary of Satan’s strategies, as well as the weapons and armor we have been given by God to defeat him.

In the present work, we can see concrete examples of how the Devil assaults his foes, not just through extraordinary preternatural attacks, but through common temptations, both powerful and subtle. We can observe how the saints have used prayer and fasting, the sacraments, sacramentals, the Scripture, and other spiritual weapons to resist him. And we can discover how the virtues they cultivated protected their souls as a sturdy armor against diabolical temptation and attack.

My prayer, then, is that in reading such remarkable accounts of saints who battled Satan, “inspired by them you may wage the good warfare, holding faith and a good conscience” (1 Tim 18:19).