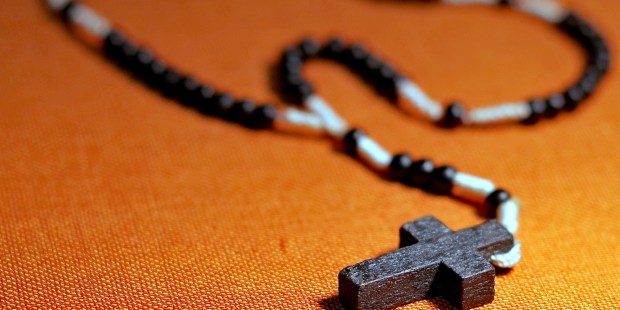 After converting to Catholicism and losing his family, he prayed the rosary awkwardly… and it worked a miracle.

When Fernando Casanova—a Puerto Rican Evangelical pastor with a Pentecostal background—converted to Catholicism in April of 2008, it was widely proclaimed.

Since then, he has become a valuable Christian apologist with his impressive knowledge of biblical references and his passionate Latino style of oratory, wearing his heart on his sleeve.

He often talks about his slow and painful 5-year process of conversion after many years of service and prestige within his Protestant church.

He began that process when, disconcerted by the continual proliferation of different Protestant groups and churches, he started searching to find the One, United Church founded by Jesus Christ, using biblical research. His passion for this investigation was rooted in his desire to prove he could “be not Catholic.”

An experience of Christ in a Eucharistic event in a Catholic church was the last straw that led to his conversion.

When he made the decision to convert to Catholicism, he told his wife, a convinced Protestant. This triggered their separation, and Dr. Casanova was left without his wife and three children.

Over the next several months, he never got to see his family, and as a faithful husband and family man he had great difficulty understanding how God would allow that suffering as a consequence of having followed the right path.

In his preaching, he recounts with intense emotion how one day he entered a chapel to seek God’s support in his sorrowful situation. In one of the pews he saw an abandoned rosary, and understood that God was asking him to pray it. Although his conversion to Catholicism was solid, his Evangelical background made it extremely difficult for him to pray the rosary, but he turned to the Blessed Virgin and told her he was willing to pray the rosary on two conditions:

— “That my wife and I be reconciled”

— “That my wife, my children and I enter into full communion with the Church of your Son”

He prayed the rosary “awkwardly and without faith, asking God for forgiveness after every ten Hail Marys in case He didn’t like what I was doing.”

That same day, he got together again with his family and was reconciled to his wife.

Just a year after this “badly prayed rosary,” Dr. Casanova, together with his wife and children, was received into the Catholic Church in the Cathedral of Puerto Rico.

He laments not having held on to that rosary which, a year earlier, he had found in a pew, because he would like to have it and be buried with it.

Translated from the Spanish by Matthew Green.