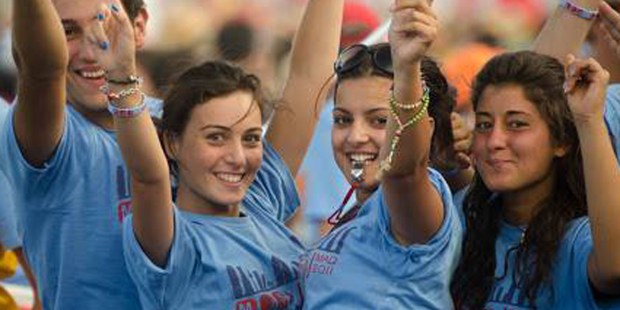 Most Catholics still don’t get that their vocation is to carry their faith into the marketplace, into schools, into office buildings, into the corridors of government, into sports stadiums, and into the streets.

Last week, I had the privilege of speaking to around 9,000 middle school and high school students from the Catholic schools of the Los Angeles Archdiocese. They were gathered in the cavernous Galen Center at the University of Southern California, and the atmosphere in the room was electric. There were games and a good deal of upbeat music, but when Archbishop Gomez processed into the arena carrying the Blessed Sacrament for Benediction, you could hear a pin drop. There is just something uniquely moving about seeing 9,000 energetic kids suddenly falling to their knees in silent adoration.

At the very end of the morning, I came on stage to address the crowd. My first move was to ask all of the young people to scream as loudly as they could. What ensued could be compared to about 10 jet airplanes taking off at the same time, or perhaps, to a Beatles concert circa 1964. When they finally settled down, I said, “I want you to remember that sound, because if we could harness that energy for the purposes of Christ, we could transform this entire city overnight.” I do indeed believe that Vatican II’s universal call to holiness is a largely unrealized dream. Most Catholics still don’t get that their vocation is to carry their faith into the marketplace, into schools, into office buildings, into the corridors of government, into sports stadiums, and into the streets. I wanted those kids at USC at least to start thinking about this great mission.

I then shared three spiritual truths that I invited them to internalize. First, I said, if they want to be happy, they have to play an emptying game rather than a filling game. The secular culture, in a thousand ways, tells them that the key to happiness is filling up their lives with the goods of the world, more specifically, with money, sensual pleasure, power, and fame. Watch, I told them, practically any movie, listen to practically any popular song, attend to practically any pop star, and you’ll hear this message over and over again, repeated ad nauseam. But precisely because we have all been wired for God, which is to say, for an infinite happiness, none of these finite goods will ever satisfy the longing of the heart. Indeed, the more relentlessly we seek them, the less satisfying and more addictive they become. The game, instead, should be contriving a way to make your life a gift. The formula behind this resolution, I explained, is rather straightforward. Since God alone fills up the emptiness of the heart, and since God is love, then only a life of radical love will actually fulfill us and make us happy. Though it conforms to the strictest logic, this message has always been hard to take in. It has always appeared as counter-cultural.

The second lesson I shared was this: don’t settle for spiritual mediocrity! Quite appropriately, we strive for excellence in every arena of life: business, sports, medicine, the arts, etc. But somehow we think it’s alright to ignore the spiritual life or, if we think of it at all, to give it a modicum of our time and attention. But compared to worldly activities, the spiritual endeavor is infinitely more important, for it has, literally, eternal implications. When the young Fr. Karol Wojtyla (Pope John Paul II) took young people on camping and kayaking excursions in the forests around Krakow in the mid-20th century, he was instilling in them a sense of the high adventure of life with Christ. At a time when the Communist government of Poland was endeavoring to stamp out the Catholic faith, Wojtyla was summoning his young charges to be saints. And when those kids came of age, they were the great Catholic business leaders, great Catholic writers, great Catholic scientists and politicians who spearheaded the revolution that eventually led to the breakdown of the Soviet Empire. They weren’t satisfied being lukewarm Catholics, and neither, I told the young people at the Galen Center, should you be.

The third spiritual lesson that I shared was this: be rebels! We worship the crucified Jesus, someone who stood so thoroughly athwart the religious, cultural, and political powers of his time that they saw fit to put him to death. Every one of Jesus’ apostles, with the exception of St. John, died a martyr’s death. Every single bishop of Rome, for the first century of the Church’s life, was put to death for his faith. And if you think the age of martyrs is over, I informed the young people, think again. The 20th century had more who witnessed to the faith with their lives than all of the previous centuries combined. We Christians are a rebellious lot—and this should appeal to the idealism and contrary spirit of the young. And don’t tell me that the rebels are singers and pop stars! Such people, obsessed with wealth, pleasure, fame, and power, are absolutely mainstream, run of the mill, ordinary as dirt. If you want to see a real rebel, I said, take a good hard look at the recently-canonized St. Jose Sanchez del Rio, the 14-year-old boy killed during the Cristero uprising in the early 20th century. Tortured, mocked, forced to march on lacerated feet, shot on the edge of his own grave, he never renounced his Catholic faith. Stand, I said, with the great rebels in the company of Christ.

What a joy it was to see so many of our young people gathered together in fellowship and enthusiasm for the Lord Jesus. May their tribe increase!