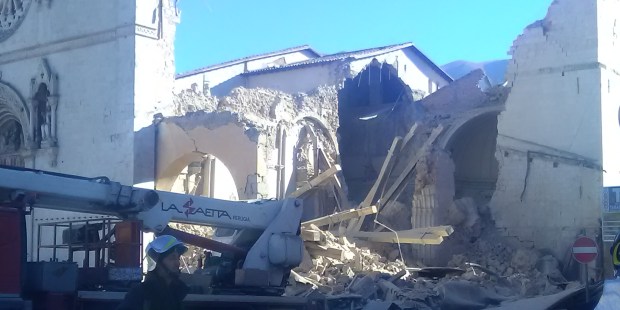 VATICAN CITY—Pope Francis has telephoned the Archbishop of Spoleto-Norcia, Renato Boccardo, to express his closeness to the people of the region affected by Sunday’s massive 6.6 magnitude earthquake.

The Pope made the call after offering the Sacrifice of the Mass at a Roman cemetery, on the liturgical feast of All Souls.

“I send my closeness, my prayer, and my blessing to all the people of Norcia and the Valnerina,” Pope Francis told the archbishop. “I followed this latest tragedy of your people from Scandinavia and I prayed for you all there.”

The Pope also said he was saddened by the collapse of so many sacred buildings, symbols of the faith and identity of the people.

Sunday’s quake, the largest tremor to hit Italy in 36 years, destroyed the Basilica of St Benedict built atop the birthplace of the founder of Western Monasticism and one of the most influential figures in European civilization and culture.

Archbishop Boccardo was in Norcia for the visit of the President of the Italian Republic Sergio Mattarella. He was touring the areas most damaged by the earthquakes.

He explained to the Holy Father “the difficulties and worry of the people about the future.”

The Pope replied: “We must encourage the people; they should be supported so that they look to the future with optimism.” He also urged him: “Stay close to the people, do not let them lose hope,” including the hope that they will “continue to live in their own land.”

The Archbishop said the entire diocesan Church of Spoleto-Norcia is grateful to the Pope for this additional show of support for the people of the Valnerina valley, after the visit the Holy Father made to San Pellegrino di Norcia on October 4, following the earthquake of August 24, which killed 298 people in Amatrice and other towns in the region.

Interview the Benedictine Monks of Norcia

Vatican Radio’s Italian edition spoke with the subprior of the Benedictine Monks of Norcia, Fr. Benedict Nivakoff, who said the young community is more resolved than ever to remain and rebuild the birthplace of St. Benedict. Vatican Radio’s Marco Guerra began his wide-ranging interview by asking how one finds hope amid the devastation:

Fr. Benedict: Hope always starts afresh from Christ, not from ruins but from spiritual foundations. Monastic life, and as a consequence everyone’s life, must be founded on the path to heaven, on a spiritual journey … It is not that the buildings are not important; indeed they are extremely important, but moments like these remind us of what is most important.

VR: So a church made not only of stones but also of the people who live in a community. How has Norcia responded?

Fr Benedict: We have a strong bond with the people because, for Norcia, St. Benedict is the chief citizen and the Nursini, not for reasons of our own merit, are very devoted. They see the monks as ambassadors of their patron. They help us in everything and ask us to intercede for them in prayer. They know that we were praying on the morning of the earthquake; and they know that, thanks be to God — it was truly a miracle! — no one died.

VR: St. Benedict, we recall, is the patron of Europe. The whole continent should help to participate in the rebuilding …

Fr. Benedict: Yes, in fact, St. Benedict is a cornerstone of European culture. If what has happened offers Europe a new window, a new vision regarding their roots, then it will be one of the fruits that springs from this great suffering.

VR: The Italian entrepreneur, Brunello Cucinelli, has offered to help the Basilica. How have you received this offer, this outstretched hand?

Fr. Benedict: Mr. Cucinelli has been a great friend of the monastery for some years. He has financed and helped us with many monastery projects in recent years, and so we welcome his offer with great gratitude and friendship. I know that there have been many offers and great readiness to help us rebuild. We have two monasteries: one at the birthplace of St. Benedict, and the other on the mountain overlooking Norcia that will be more focused on prayer. With the help of many people we hope to be able to rebuild both.

VR: Rebuilding the symbols of faith and art also helps to repair the social fabric that animated Norcia and all of that part of Umbria.

Fr. Benedict: Yes, absolutely. The proper execution of this restoration project, of rebuilding, should be seen as something that will help to keep the city’s identity alive.

VR: We know that there are monks from all over the world in your comnunity. Do some of the monks want to leave? What intentions do the monks have who were used to praying in the crypt of the Basilica?

Fr. Benedict: No, quite the contrary, everyone is more rooted than ever. There is not the slightest idea of going home; just the opposite. We want to create a home for Benedictines here, a home for the monks that is much more robust and much larger, to accommodate many more vocations.

VR:  Have you received messages of solidarity from the universal Church, from the Church all over the world?

Fr. Benedict: Yes, from all over the world. St. Benedict and his Basilica are very loved and we have become keenly aware of this many times in the course of our history here in Norcia, but especially now.

VR:  One image that has made it around the world and affected all of us deeply is that of people kneeling — both religious and lay — in front of the façade of the Basilica which had been destroyed. Isn’t spiritual consolation in moments such as these essential?

Fr. Benedict: The image of someone on their knees is always an image of a person who wants to do penance, an image of repentance, of compunction: we realize that we have erred. This is very important after a tragedy: God saved my life. Why? What do I need to change?

VR: We wondered where God was in the previous earthquakes. In this case no one died.

Fr. Benedict: This is true, and it can be difficult for us to see these miracles. But when one looks at the development of these earthquakes, we began with a magnitude 3 earthquake, then 4-5, then 6… then little by little we arrived at this big one… The smaller earthquakes prepared all of us to leave the city. They pushed everyone to remain vigilant, especially the monks, because had these other earthquakes not happened, we would have been under the rubble of the Basilica.

VR:  The stones can be put back, the houses can be rebuilt, but how do you convince human beings not to leave these lands…?

Fr. Benedict: I would move slowly in trying to convince anyone. It’s difficult for people to return to their homes … and this is understandable. We need things to be rebuilt very well in order to give people the feeling that the buildings are really safe, and then we mustn’t force it…

VR: Will you ask for the intercession of St. Benedict? St. Benedict is also a driving force to attract attention to the earthquake-stricken areas…

Fr. Benedict: Yes, he has always been our guide and reference point, and he always will be.

Thank you to Vatican Radio’s Italian edition for this interview.