My mother’s daily conversation with God and His Blessed Mother 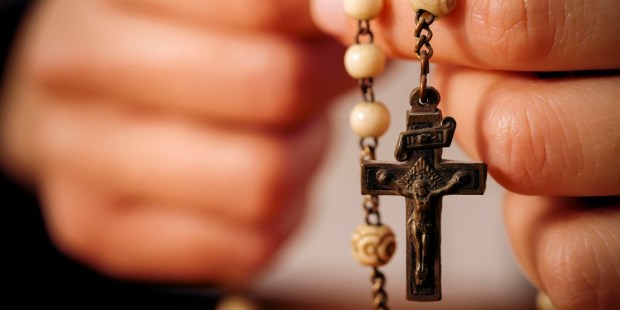 “It’s not the beads that matter; it’s the prayers,” she would say of her rosary.

Mom always said the rosary, every single day. One of my earliest memories of her is how she would sit up in bed when she first woke up, taking her beads and silently reciting the prayers. I can’t remember thinking much of it as a child. It was just part of her.

I’d come running in and interrupt her with something of great importance to me in the moment. Why weren’t my favorite jeans out of the laundry yet, or could she pick me up at 4:00 that day. I needed money for a field trip, or I complained that there was no crunchy peanut butter left. One day I remember interrupting her rosary yet again because I’d missed the bus and needed her to drive me to school. She never seemed to mind being interrupted. She could seamlessly answer me and pick up right where she left off in the middle of a prayer.

I don’t remember my mother ever sitting down and purposefully teaching me the rosary. Gradually I picked it up, from hearing the quiet murmur of my mom’s constant prayers, reciting it in Catholic school and once in a while saying it in church together. It was instilled in me early on that prayer was a daily, constant conversation with God and His Blessed Mother.

My mother would pick up whichever set of beads was nearby. Sometimes it was an old broken plastic string; other times it was the beautiful silver set she’d gotten for her First Communion, which she received as a young adult when she converted to Catholicism. There were beads on the nightstand, beads in the drawer, beads strung over the bedpost, beads in a little zipper case in her purse. Some days she could not find a set at all and would just count the prayers on her fingers. “It’s not the beads that matter; it’s the prayers,” she would say. Sometimes she would pray the rosary before Mass or after confession. She would sometimes use the time waiting in a doctor’s office to “get a few decades in.”

Special rosaries were said for special intentions, such as a cousin’s troubled marriage, an aunt’s surgery, a big test for one of us, a friend diagnosed with cancer, for the soul of a man who committed suicide, for her mother in a nursing home, for any kind of a trip, and for each of us starting college. Surely there were extra rosaries said as her children became young adults and caused endless worry over driving, dating, drinking and disagreements.

One memorable rosary was said on a trip through Italy. Driving across the Alps, we were low on gas heading through a mountain range when a blizzard hit. We were in a whiteout already when we mistranslated a sign and took a wrong turn, bringing us higher up the mountain and further into the storm. From the front seat, I heard the beads come out of Mom’s bag behind me. I realized that her praying the rosary gave me peace and assurance that God was still in control and that the great source of power in the world is prayer. She had just about finished five mysteries as we wound our way out of the blizzard. Up ahead we could see a small building. Yup, a gas station. I said, “Mom, that rosary just brought us a small miracle!” “Oh sure,” she said, not surprised. “There are always great graces from praying the rosary!”

I once asked my mother, while she was praying her morning rosary, what her primary prayer was. She immediately answered, “Oh, well, naturally for all my children to remain Catholic and get to heaven, that’s the most important thing, of course.”

Later, as she struggled with Lou Gehrig’s disease and could no longer move the beads through her fingers, she would ask me to get them and place them in her hands just the same. Her total trust in meditating on the mysteries and in the intercession of the Blessed Mother are still a daily inspiration to me. Looking back I can see the role the rosary played in bringing me back to the Church. Now I pray the rosary every day too.