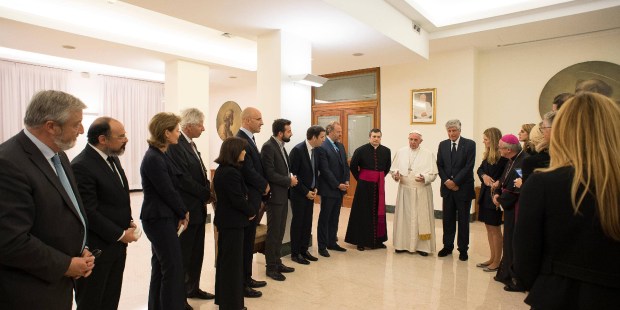 What did Pope Francis tell leaders of the digital world from Google, WPP, Publicis, Média-Participations and the publishers of the video-game Candy Crush when he recently welcomed them to the Vatican? His message was a genuine surprise.

Looking into the eyes of leaders in communications, the pope stressed that “the world needs a revolution of tenderness.”

Pope Francis’ message came at the end of a conference which brought together heads of some of the most prominent and cutting-edge digital companies to address a pressing topic: “The transmission of values in the digital age.”

The “Core Values” conference, under the patronage of the Vatican Secretariat for Communications, the Pontifical Lateran University, and La Tela Digitale, was held on November 4, 2016, at the Lateran.

Lastly, the papal audience included Prince Nikolaus of Liechtenstein, President of the Foundation for Evangelization through the Media (FEM); Eddy Moretti, Creative Director of Vice Media; and Riccardo Zacconi, Co-founder & CEO of King Entertainment, the company that produces the videogame series Candy Crush.

Pope Francis’ meeting with leaders in the digital world took the form of a conversation in which he opened his heart to share with his guests a personal message: the need for tenderness, “which the world tends to forget.”

“I believe we need to create a revolution of tenderness,” the Holy Father said, recalling that the world is losing the value and importance of a caress. “You have to speak about it; otherwise the world will forget,” he said.

The participants in the papal audience belong to different religions. Before departing, the pope therefore wished to give his blessing to everyone “according to their own religion.”

During the conference proceedings, speakers and participants discussed Pope Francis’ appeal in the encyclical, Laudato Si’, in which he stated: “As never before in history, common destiny beckons us to seek a new beginning.”

“Let ours be a time remembered for the awakening of a new reverence for life, the firm resolve to achieve sustainability, the quickening of the struggle for justice and peace, and the joyful celebration of life,” the Pope said regarding the values the digital age should seek to promote.

In his opening address at the conference, the Rector of the Pontifical Lateran University, Bishop Enrico Dal Covolo, explained that the Church is not unaware of the wealth created by the digital world and its economy, but asks that there be “rules for digital citizenship to ensure that the exchange of data and information is ethically correct.”

“It is not up to the Church to identify these rules, but the Church can provide a compass for both public authorities and private actors,” he said.

For his part, in a video message broadcast during the event, Monsignor Dario Edoardo Viganò, Prefect of the Secretariat for Communications of the Holy See, recognized that one cannot let the digital age create an inhuman world.

“The person must always be central regardless of culture, and access must be granted to everyone so that no one is excluded from the benefits of progress,” he said.

The conference concluded with an address by Monsignor Lucio Ruiz, Secretary of the Secretariat for Communications of the Holy See, who announced the commitment of conference participants to drafting a Universal Charter of values for the digital society, to be published soon.