Patriarch Bartholomew: 25 years as guiding light in Orthodoxy and dialogue with Rome 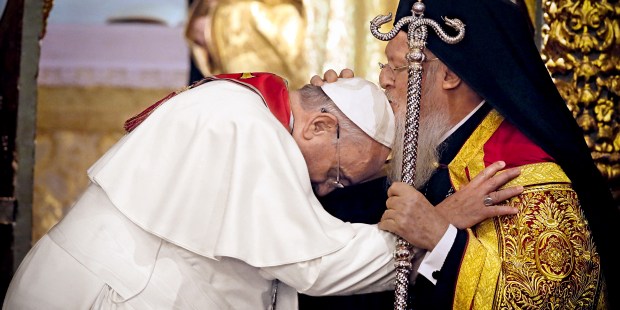 If Christians cannot yet come to agreements that will heal the divisions of the past thousand years, they can at least spend their time repenting of those divisions, says the leader of the world’s Orthodox Christians, according to his biographer.

The Ecumenical Patriarch, Bartholomew I, has just celebrated his 25th anniversary as Archbishop of Constantinople, and he continues to work for unity and dialogue, not only with other Christians but also with adherents of Islam and other religions and with political leaders of many stripes. So says Father John Chryssavgis, author of Bartholomew: Apostle and Visionary. The patriarch, who has developed a strong relationship with Pope Francis since the 2013 election of Cardinal Jorge Mario Bergoglio as Bishop of Rome, also continues to be outspoken about his concern for the environment and for the future of Christianity in the Middle East.

As the traditional “first among equals” in the Orthodox communion of patriarchs, Bartholomew is often the conciliator among the 14 autocephalous Orthodox Churches, such as the Greek, Russian, Georgian and Bulgarian. He is widely credited for bringing most of those Churches together for the Holy and Great Council that took place at Pentecost this year on the island of Crete. Decades in planning, the gathering was the first such council to be held since the Seventh Ecumenical Council in the year 787.

At the same time, Bartholomew has been one of the more familiar faces among the Orthodox in relations with the Catholic Church, carrying on a rapprochement begun under one of his predecessors, Ecumenical Patriarch Athenagoras I.

But for all the progress that has been made by theologians and ecumenists, restoration of the full communion that was lost in 1054 sometimes seems quite out of reach.

“I have heard him say that although we’ve made a lot of progress, significant developments in reconciliation, first of all in understanding one another better and understanding one another’s theological and institutional developments, especially in the second millennium, I have heard him say that we regret, with pain, that union between the two Churches won’t be immediate or swift, that although that is his prayer and in fact the mandate of the disciples of Christ that the Christian Churches be united, he doesn’t think that it will happen in his lifetime,” Father Chryssavgis said in an interview. “The reason is that it’s been a thousand years of division with many developments that historically and culturally have been very dark, very painful: the crusades; efforts at reunion that left a bitter taste in the mouths of many Eastern Christians… noble attempts at reunion but also politically motivated in some cases, so they failed; no contact whatsoever between the Churches for 500 years….”

But Bartholomew, 76, is not resigned to passivity either.

“There’s one thing I’ve heard him say that I like very much: that if we can’t be in full unity right now we can at least be repentant of the disunity that characterized our two Churches in the past,” Father Chryssavgis said. “At least be conscious of and repentant of the harm we’ve inflicted on each other because of the hardening of our positions or the misinterpretation or prejudice between our two Churches. That is something I think Bartholomew feels very strongly about, that it’s only through ongoing dialogue that the two Churches can reach any point of reconciliation or unity.”

Bartholomew has worked with three popes during his tenure as Archbishop of Constantinople. That means he has dealt with three different personalities, though each pontiff has in his own way been committed to ecumenism. Pope St. John Paul II, said Father Chryssavgis, was a bold and courageous bishop of Rome, who was “ready to take on this new step of a theological dialogue,” said the priest, who is a theological advisor to the Ecumenical Patriarch on environmental issues.

It was on a visit to Istanbul in 1979 that John Paul, together with Bartholomew’s immediate predecessor, Patriarch Demetrios, announced the creation of the Joint International Commission for Theological Dialogue between the Roman Catholic Church and the Orthodox Church. The dialogue has discussed many issues and issued several joint statements. It was suspended for several years due to a dispute over the Eastern Catholic Churches.

But Pope Benedict XVI, as a theologian, “wanted to restore the dialogue after its suspension and was interested theologically in what the two Churches could discuss and agree on,” Father Chryssavgis said. “That played a major role in terms of the ongoing discussion between the two Churches.”

With Francis, the priest continued, “we do see something that’s courageous, like John Paul II; we do see an interest in theology, as with Benedict, certainly underlining the importance of the dialogue between the two Churches, but we see something different as well. If John Paul is the courageous one, and Benedict is the theologian, Francis is the compassionate one, the merciful one, the one who is more personal, in a sense. He’s connected with the Patriarch on many different levels, most recently meeting together on the [Greek] island of Lesvos to demonstrate an act of solidarity with and care for the persecuted refugees from the Middle East, mostly from Syria; caring for the planet, caring for the integrity of God’s creation. … In [the 2015 encyclical] Laudato Si’ Francis mentions the Patriarch in three paragraphs, an entire section, immediately after mentioning his predecessor popes.”

The two current leaders of Western and Eastern Christianity have been tagged, of course, with monikers indicating their concern for the environment: the Green Pope and the Green Patriarch.

“The patriarch sees it as a natural extension of theology of Christian Church, a natural extension of the theology of creation…and of the incarnation, the fact that God made the world and loved the world and in fact so loved the world that he gave his only Son,” Father Chryssavgis explained. “For the patriarch, the fact that the Word of God assumed flesh and dwelt among us is an indication of the very fundamental Christian doctrine of the goodness of God’s creation and of our responsibility to give thanks to God for the beauty of his creation and to protect, to preserve, to pass on the beauty of his creation in generations to come.”

And, in a world that sometimes seems like it is in the early days of a new global war, as Pope Francis has suggested, the ecumenical patriarch insists on the primacy of the position he has always embraced: dialogue.

“It’s part of the DNA of the patriarch, what makes him tick,” said Father Chryssavgis. “We are human only to the extent that we can open up to another human being. We are a society that really wants dialogue if we can open up to societies that are different from us. That can say a lot to a world that is suddenly becoming more and more globalized and a world that feels often threatened by other communities and other cultures.”